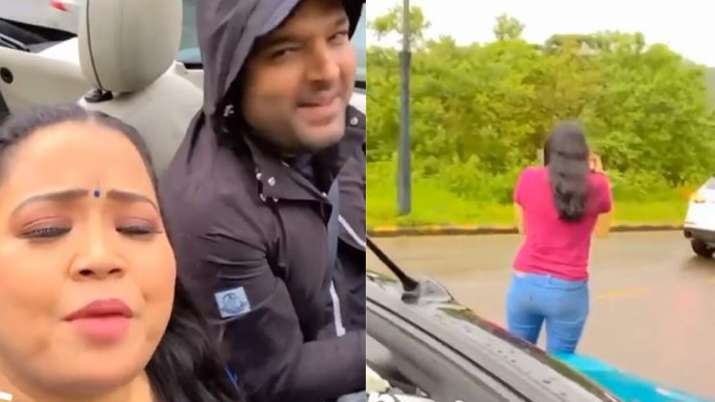 As the whole country grooves to the viral song ‘Bachpan Ka Pyar’ sung by a little boy named Sahadev, the song seems to be getting popular amidst celebrities as well. After Anushka Sharma shared the meme on the same on her Instagram and ‘Gully boy’ actor Siddhanth Chaturvedi who took to his IG reels to share a hilarious clip, comedians Kapil Sharma and Bharti Singh were seen recreating the viral song ‘Bachpan Ka Pyar’ in a new video shared on his Instagram Stories. However, their singing seemed to have scandalised a fan who ran away without even taking a picture with them.

In the video clip, Kapil and Bharti can be seen sitting in a car and singing Bachpan Ka Pyaar. Bharti then turned the camera towards a woman, who ran away, and said, “Yeh hai jaaneman. Kahaan bhaag rahi ho? Ruko, ruko. Photo toh khichao.”

“Fun with fans,” the caption read, along with a heart emoji. Kapil and Bharti’s video went viral on social media and was shared by the fan pages.

Last month, Kapil had treated his fans with exciting news as he shared the first promo of the new season of The Kapil Sharma Show. Featuring Kapil Sharma with Krushna Abhishek, Kiku Sharda, Bharti Singh, Chandan Prabhakar, Archana Puran Singh and Sudesh Lehri, the promo is well received by the fans.

The show went off air earlier this year when Kapil decided to take a break for his wife Ginni Chatrath, their daughter Anayra and their newborn son Trishaan.

Earlier, Bharti Singh informed that she had to accept the pay cut of her usual remuneration for the upcoming season of The Kapil Sharma Show. The show will reportedly make a comeback in August on the Sony Entertainment Television channel.

Schools in Punjab reopen for all classes from today