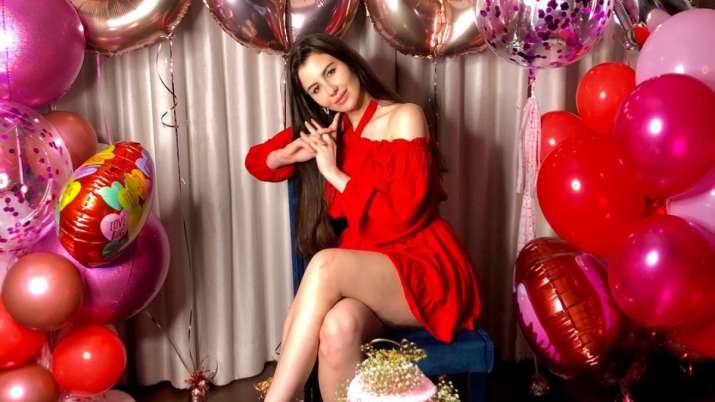 Actress Giorgia Andriani clocked 500K followers on the photo-sharing app Instagram. She celebrated the milestone with her fans and followers by sharing some beautiful pictures of herself. Taking to Instagram, Giorgia gave a sneak peek of her celebrations, where she can be seen posing with cake in a room filled with balloons. Giorgia Andriani thanked fans and followers for their love and support. “500K big a fam. Thank y’all (sic),”

She looked dazzling in a red halter neck dress from StyleAsh. She completed her look with hoop earrings and kept her make-up minimal.

Soon after the post, she was showered with a lot of praises in the comments section. One of the users wrote, “way to go Giorgia, to greater things ahead. The other said, “U r true Rockstar.”

Giorgia often treats her fans with stunning pictures in offbeat outfits. Check them out here:

On the work front, Giorgia made her debut in the south with the series ‘Karoline Kamakshi’ on the professional front. She was also seen with Mika Singh in his music album recreating the evergreen song ‘Roop Tera Mastana’. She will be seen next in Welcome To Bajrangpur alongside Shreyas Talpade.

Why China is putting pigs in luxurious 13-storey ‘hog hotels’

Covaxin effective against Delta Plus variant of Covid-19: ICMR Study