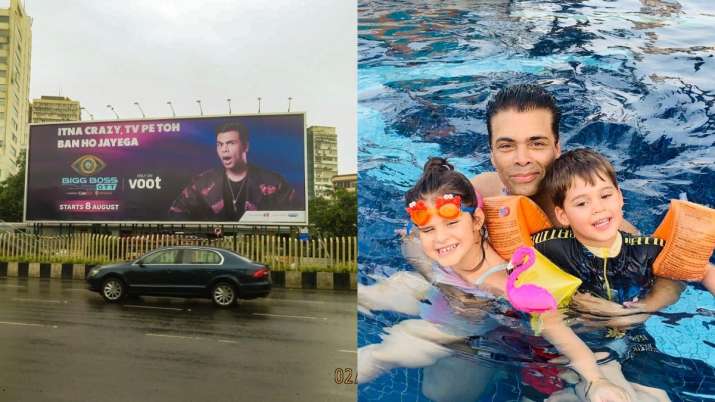 Filmmaker Karan Johar, who is all set to host ‘Bigg Boss OTT’, has shared his biggest fear. He says staying away from his children Roohi and Yash is his “biggest FOMO”. “Staying away from my kids is my biggest FOMO, they are the source of my happiness. Not being around them for long is killing,” Karan said, while talking about his kids.

Karan is all set to host the drama for the six-week run of ‘Bigg Boss OTT’. It will stream on Voot from August 8.

Karan also took to Instagram and shared a billboard featuring him. He wrote, “Painting the city, over the top. Kya aap ready hain for all the craziness? Bigg Boss OTT aa raha hai on 8th Aug only on Voot.”

The first confirmed contestant of the show is playback singer Neha Bhasin, who has belted out hits such as ‘Jag ghoomiya’, ‘Swag se swagat’ and ‘Nai jaana’ among many others.

The makers on Sunday teased the second contestant too, however, they have not revealed the name. Reportedly, actor Karan Nath will be joining Bigg Boss OTT as the second confirmed contestant. He made his Bollywood debut with Paagalpan opposite Aarti Agarwal. He was also seen in films namely, Yeh Dil Aashiqanaa, Tum – A Dangerous Obsession and Sssshh…. and Tera Kya Hoga Johnny. Karan was last seen in 2020 film Guns in Banaras.

Meanwhile, after the completion of the digital exclusive, the show will move to Colors with the launch of Season 15 of ‘Bigg Boss’, hosted by Bollywood superstar Salman Khan.

After the completion of the digital exclusive, the show will move to Colors with the launch of Season 15 of ‘Bigg Boss’, hosted by Bollywood superstar Salman Khan.

Gurjit Kaur: From hardships to entering Olympic semis, match-winner’s story will inspire you