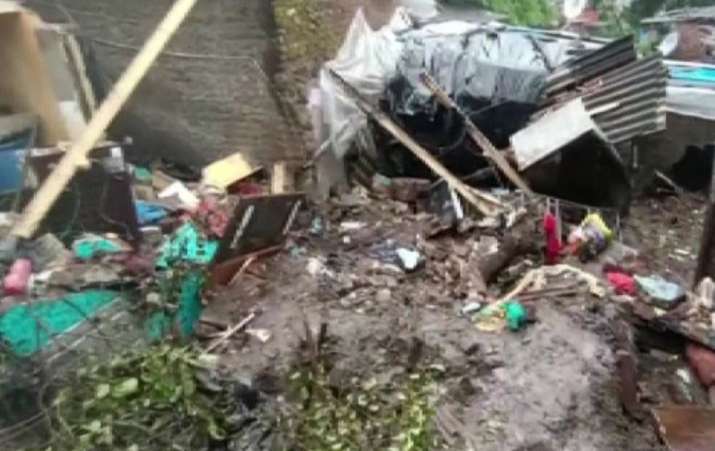 Fifteen people died in house collapses triggered by landslides as incessant overnight rains pounded Mumbai and nearby areas, with the city witnessing severe waterlogging, and disruption of local train services and vehicular traffic. Twelve people died as a compound wall came crashing down on some houses after a landslide at Bharatnagar Vashi Naka locality in Mumbai’s Mahul area, a fire official said.

The retaining wall collapsed at 1 am, he said. Two people were injured and taken to nearby Rajawadi hospital from where they have been discharged after preliminary treatment, he added.

Three hutment dwellers were killed as five shanties collapsed after a landslide following incessant overnight rains in Mumbai’s Vikhroli suburb at 2.30 am, a civic official said. Two persons were injured and were sent to a nearby hospital, he added.

Here are the updates

08:37 am: Three bodies have been recovered and 5-6 more people are feared trapped in the debris of the building that collapsed in Vikhroli area following incessant rainfall in Mumbai: NDRF Deputy Commandant Ashish Kumar

08:29 am: Two bodies have been recovered by NDRF from the debris (in Mumbai’s Chembur). Ten bodies were recovered by locals before the arrival of NDRF personnel. At least 7 more people are feared trapped: NDRF Inspector Rahul Raghuvansh

08:08 am: A ground-plus-one residential building collapsed in Mumbai’s Vikhroli area in the wee hours of Sunday, killing three people, as per BMC. Rescue operation is underway

07:31 am: 11 people killed after a wall collapse on some shanties in Chembur’s Bharat Nagar area due to a landslide, says National Disaster Response Force (NDRF). Rescue operation is underway

Meanwhile, incessant overnight rains threw parts of Mumbai out of gear on Sunday with the city witnessing severe waterlogging, disruption of local train services and vehicular traffic. The India Meteorological Department (IMD) has issued a red alert for Mumbai in the backdrop of heavy rains, a BMC official said.

The suburban train services on both Central Railway and Western Railway in the financial capital were suspended due to waterlogging in the tracks due to the overnight heavy downpour, railway officials said.

Priyanka Chopra kicks off her birthday weekend by bathing in the sun, sizzles in black swimsuit