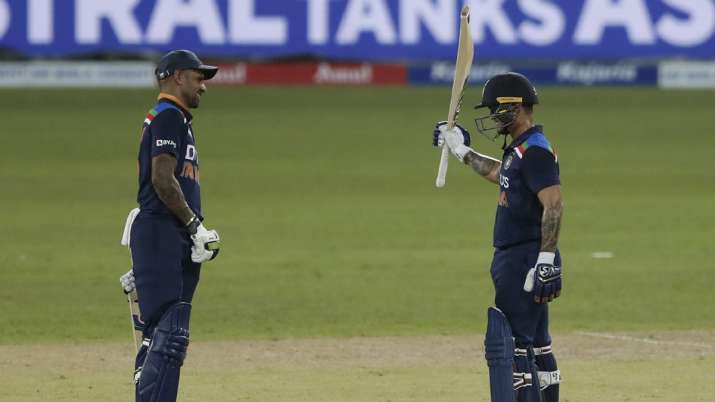 Ishan Kishan celebrated his 23rd birthday with a dazzling half-century on debut while Shikhar Dhawan, in his first match as captain, anchored India to a walk-in-the-park seven-wicket victory over Sri Lanka in the opening ODI here on Sunday.

On a track that offered slow turn, the inexperienced Sri Lankan batters splurged like millionaires, throwing away one wicket after another but still managed to get 262 for nine, which wasn’t going to be enough against India’s batting might.

And it certainly didn’t, with the target being achieved in just 36.4 overs.

Prithvi Shaw, with his new found swagger in 50-over cricket, butchered the Sri Lankan pacers during his brief stay by hammering nine boundaries in a 24-ball 43.

That set the pace for Kishan to come in and hit a six off the very first delivery he faced an followed it up with a square driven boundary. The short Mumbai Indians man then decided to use his bat like a sledgehammer, scoring the second fastest ODI fifty on debut — off 33 balls — to kill the contest inside the first 20 overs.

He did live dangerously getting reprieve twice but his 59 off 42 balls with eight fours and two sixes certainly makes him a strong contender to make it to the final list of 20 for the ICC T20 World Cup.

Veteran Dhawan, who very wisely dropped anchor and let the young guns express themselves, then took over to finish off the match in a professional manner with an unbeaten 86 off 95 balls.

All those years of experience did come in handy as he played second fiddle to Shaw in an opening stand of 58 in 5.3 overs and during a second-wicket partnership of 85 with Kishan in only 12.2 overs.

But once Kishan was out and with Manish Pandey, (26 off 35 balls) playing to save his international career, scratching around, Dhawan started playing his shots to not let the momentum slip away at any stage, hitting six boundaries and a six.

Pandey’s selfish approach, trying to score his own runs at the team’s expense, didn’t yield him any great results as another debutant, Suryakumar Yadav, showed his flamboyance, smashing a quickfire 31 off 20 balls.

Apart from Pandey, the other performance that stuck out like a sore thumb was Bhuvneshwar Kumar (0/63 in 9 overs), who didn’t look penetrative enough.

India’s bowlers were disciplined for the better part, without being exceptional, as Kuldeep Yadav (2/48 in 9 overs) and Yuzvendra Chahal (2/52 in 10 overs) got their share of wickets due to Lankan profligacy.

And then Krunal Pandya‘s (1/26 in 10 overs) nagging accuracy made run-scoring an arduous task in the middle-overs before Karunaratne (43 no off 35 balls) played a cameo to take the home team past 250 with two huge sixes off Bhuvneshwar Kumar’s (0/63 in 9 overs) bowling.

The Indian pacers also bowled a lot of slower deliveries at the back end as Deepak Chahar (2/37 in 7 overs) got a couple. It was heartening to see Hardik Pandya (1/33 in 5 overs) among the wickets and bowl a few overs across two spells. Hardik though never looked like bowling any effort deliveries and, instead, tried to hit the hard lengths.

The first game of the series, which could well be a make-or-break for Kuldeep, saw him pick two quick wickets in the 17th over to effect a break in momentum and the home team never really picked up the pace after that.

The best part was to witness the three spinners operating with their distinct styles of bowling.

Kuldeep used the flight and drift more, Chahal bowled fuller lengths but not as many vicious leg-breaks, while Krunal’s wicket-to-wicket deliveries and the speed at which he bowled, was commendable.

Between the three, they bowled 98 dot balls which formed as many as 16.2 quiet overs. Add the pacers’ cumulative dot balls, and the plight of the unheralded Sri Lankans was compounded on a slow turner, as more than 25 overs of the stipulated 50 went without scoring.

Most of them got a start but didn’t have the wherewithal to convert the 20’s and 30’s into a big score.