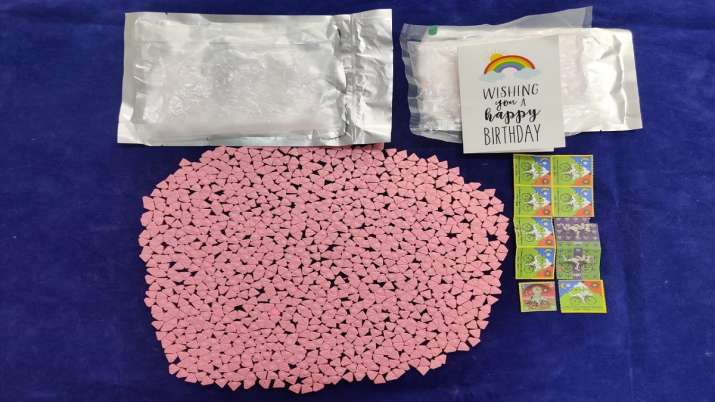 In a major breakthrough, the Air Customs officials at Chennai airport intercepted a parcel from Spain that had arrived at the Foreign Post Office on suspicion of containing narcotics. Acting on inputs, the personnel of the department opened the cardboard box and found in it 994 “Pink Punisher” methylene-dioxy-meth-amphetamine (MDMA) also known as ecstasy pills worth Rs 50 lakh.

The personnel also found 249 lysergic acid diethylamide (LSD) stamps worth Rs 6 lakh concealed in a greeting card in the parcel addressed to a person in Auroville, near the Union Territory of Puducherry.

The stamps were hallucinogens, and soaked in sheets of absorbent paper with colourful designs that are cut into small, individual dosage units.

Searches were carried out based on the address mentioned and two persons, identified as, Rubakmanikandan, 29, of Tirunelveli (Tamil Nadu), and Loy Viegus, 28. They were arrested for their role in smuggling.

During the search, cannabis (ganja) weighing 5.5 kg valued at Rs 2.5 lakh was recovered and seized.

The arrested duo was produced before a magistrate and remanded in judicial custody.

Further investigation is in progress.