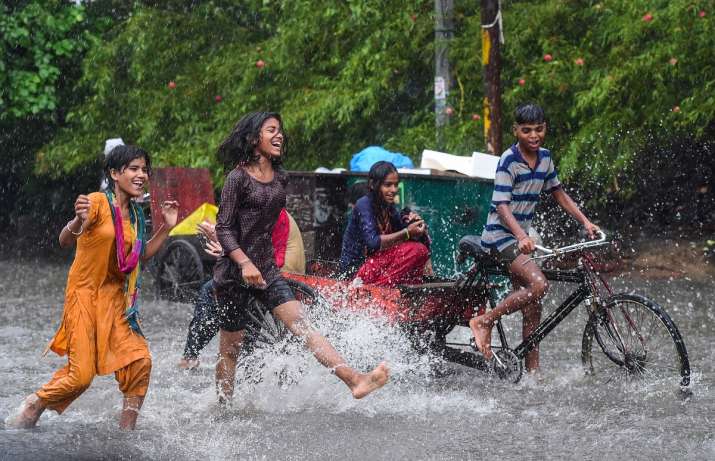 Parts of Delhi witnessed light to moderate rain accompanied by thunderstorm in the early hours of Monday. As per the India Meteorological Department (IMD), thunderstorm with light to moderate intensity rain occurred over and adjoining areas of most places of Delhi-NCR, including Bahadurgarh, Gurugram, Manesar, Faridabad, Ballabhgarh, Noida, Assandh, Safidon, Gohana, Gannaur, Sonipat, Rohtak, Jhajjar, Narnaul.

With this, Delhi’s maximum and minimum temperatures settled at 32 and 25 degrees Celsius respectively.

“Generally cloudy sky with light to moderate rain and thundershowers. The maximum and minimum temperatures would be around 32 and 25 degrees Celsius respectively,” the IMD said in its bulletin.

Private forecaster Skymet Weather said that Delhi rains are expected to make a good comeback with showers for the next two to three days.
Easterly and southeasterly winds from the Bay of Bengal as well as Southwesterly winds from the Arabian Sea are feeding moisture over Delhi and the adjoining area.

Some vehicular movement disruption was also seen in several parts of the city. Visuals from Pragati Maidan area showed heavy rainfall and waterlogging.

The weather agency also predicted that the city is likely to see water-logging in some parts. “Delhi during the initial days was seeing deficiency in terms of rains. In fact, all the nine districts of Delhi were deficient. However, with the rains last week, the deficit had reduced from 65 per cent to 56 per cent,” it added.

Visuals of incessant rainfall and waterlogging were spotted in Delhi’s Palam area.

After several faulty predictions by the IMD, Delhi-NCR finally received monsoon this year on July 13 after a long wait.

Also Read: Delhi Monsoon: Why onset of rains getting more unpredictable every year?

Govinda’s daughter Tina Ahuja: My heart is full of gratitude for the year gone by