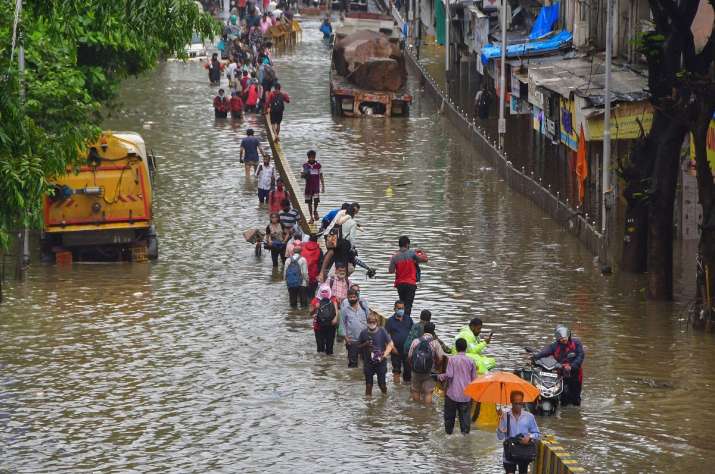 Rain fury continues in Mumbai even after nearly 30 people died in rain-related incidents in the city on Sunday. Overnight incessant heavy downpour during a major thunderstorm pummeled Mumbai, causing severe water-logging and traffic disruptions in the financial capital on Sunday. The downpur and severe waterlogging across streets led to a disruption in traffic and train services in the city, as the Western Railway and Central Railway had briefly suspended suburban train services. Also, many long-distance trains were terminated or regulated at various stations.

According to a meteorologist, Mumbai recorded over 250 mm of rain in just three hours (between midnight and 3 am), touching 305 mm by 7 am on Sunday. The IMD had also sounded a red alert indicating heavy to very heavy rainfall with extremely heavy rainfall at isolated locations. Later in the day, the IMD forecast a severe wet spell for the next couple of days and issued an orange alert for Mumbai and the Konkan coast for the next five days. As per the forecast, winds might blow at the speed of 50 to 60 km per hour. Heavy rains are expected on July 23 as well.

Meanwhile, Maharashtra Chief Minister Uddhav Thackeray took stock of the preparedness by various government agencies in the evening to tackle any emergency with the IMD forecasting a severe wet spell for the next couple of days.

Thackeray directed the agencies to remain more alert and asked authorities to keep a watch on landslide-prone areas and dilapidated buildings, the Chief Minister’s Office (CMO) said in a statement.

The flooding in the water purification complex at Bhandup affected the water supply in most parts of the metropolis, a BMC official said.

The flooding has affected electrical equipment that controls the pumping and filtration processes there, one of the major sites of water supply to the country’s financial capital, following which the BMC asked citizens to boil water before drinking. Due to heavy overnight rains, Vihar Lake started overflowing on Sunday morning, a civic official said.

A BMC statement said the lake, with a storage capacity of 27,698 million litres, is the smallest of the water bodies that are part of the supply mechanism to the metropolis.

Built in 1859, the lake supplies 90 million litres of water per day, the civic body said.

Jacqueline Fernandez says ‘Vikrant Rona’ will stand out across the globe

No Parliament ‘gherao’ planned, protestors to be given ID cards: Farmer leader over proposed July 22 protest