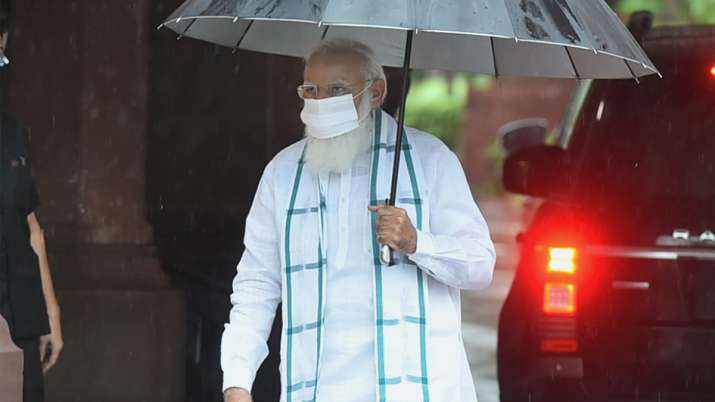 Prime Minister Narendra Modi on Monday appealed to all MPs to cooperate in following all Covid protocols and take jabs as the Monsoon Session of the Parliament begins today. Speaking to reporters outside the Parliament, PM Modi noted that over 40 crore people have been vaccinated against COVID-19 and inoculation is being taken forward at a fast pace.

“Vaccine is given in ‘baahu’ (arms), those who take it become ‘Baahubali’. Over 40 cr people have become ‘Baahubali’ in the fight against COVID. It’s being taken forward. The pandemic has gripped the entire world. So we want  meaningful discussions in the Parliament over it,” he said.

“We want that the pandemic be discussed on priority & we get constructive suggestions from all MPs so that there comes a fresh approach in fight against COVID & shortcomings be corrected so that everyone moves forward together in the fight,” the Prime Minister said.

“I would like to urge all the MPs & all the parties to ask the most difficult & sharpest questions in the Houses but should also allow the Govt to respond, in a disciplined environment. This will boost democracy, strengthen people’s trust & improve pace of development,” he told reporters.

PM Modi said that he has urged all Floor Leaders that if they can take out some time tomorrow evening then “I would like to give them all detailed information regarding the pandemic”.

The Lok Sabha will have a total of 19 sittings. This is the first session of Parliament since the results of assembly polls in Assam, West Bengal, Tamil Nadu, Kerala and Puducherry. Last year, the monsoon session began in September and the winter session was not held due to the COVID-19 situation.

According to the Ministry of Parliamentary Affairs, during the 19 sittings of the session, 31 Government business items including 29 Bills and 2 financial items will be taken up. Six bills will be brought to replace the ordinances.

READ MORE: UP mandates negative RT-PCR report for those coming from states with high positivity rate

Kartik Aaryan gears up for his next movie, drops post-workout beefed-up picture from gym