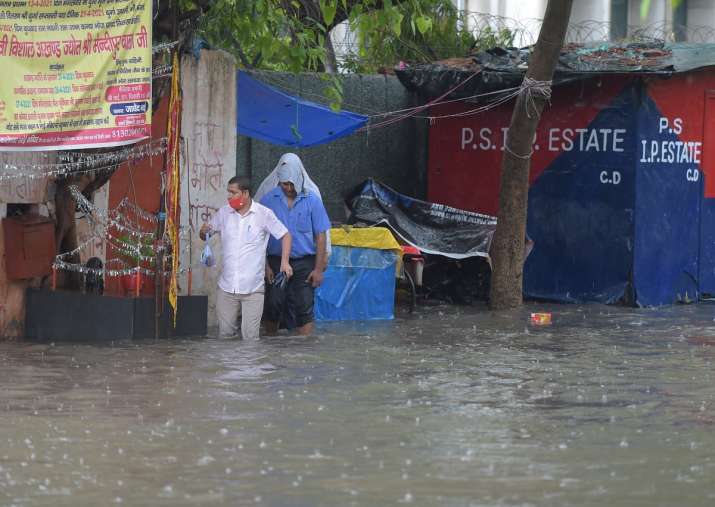 Parts of Gurugram witnessed waterlogging after receiving heavy rainfall on Monday morning. Both vehicular traffic and pedestrian movement were disrupted and the Commuters had a difficult time. According to the IMD, the sky will generally remain cloudy in Gurugram. The city may receive one or two spells of rain over the next 2-3 hours.

Morning rush hour traffic was affected and the police struggled to keep the vehicles moving. The policemen were seen standing in knee-deep water while struggling to keep traffic going. Also, 3-4 feet of water accumulated at several city roads, including the city’s bus stand in old Gurugram.

Light rains started around 2.30 a.m. on Monday, but it gained momentum by 3.30 a.m, and from morning to 9.00 a.m. it turned into a heavy downpour. Traffic movement on the Delhi-Jaipur-Mumbai highway was severely hit due to waterlogging.

“Traffic Alert: Water logging has been reported at Signature Chowk. Our traffic officials are on the spot to facilitate traffic flow. Commuters are requested to plan their travel accordingly,” read one of the series of alert messages tweeted by the traffic police.

“We were already alert when clouds were building up and took our spots as soon as it started raining. The traffic police stand in the open in such harsh conditions and try doing our best to clear traffic movements. But, things are difficult during rains. Vehicles move slowly due to much water on the roads,” said a senior traffic policeman.

“We have already deployed traffic personnel at the major junctions of the city to ensure smooth traffic movement,” Subhash Boken, spokesperson of the Gurugram police said. Several residents took to Twitter to share their experiences and posted photos of waterlogging and traffic jams. Office-goers in the city, too, faced a lot of inconvenience due to traffic disruptions.

Watch | ‘Biggest Six Ever?’: Liam Livingstone Hits Mammoth Six Out Of The Park Vs Pakistan