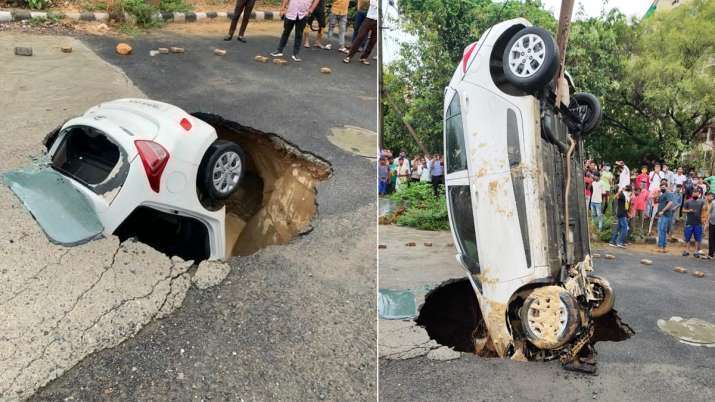 A car smashed into a caved-in road in Delhi’s Dwarka on Monday, amid heavy rains in the national capital.

The vehicle was plying on a road in Dwarka Sector-18 when it was almost swallowed by a huge hole caused due to massive downpour in the city on Monday. It was later pulled out with the help of a crane, the Delhi Police said.

No injuries were reported in the incident.

In a separate incident, a 27-year-old man died today due to drowning while he was filming the waterlogging at a railway underpass in Pul Prahlad Pur area.

Heavy rains in the city on Monday morning led to waterlogging and traffic snarls on several road stretches including ITO and Pul Prahladpur. Some of the stretches where waterlogging was reported were Ring Road, Pragati Maidan, Palam, Kirari and Rohtak road.

Nineteen incidents of tree uprooting and six cases of wall collapse were reported in the area under SDMC jurisdiction.

Not just road stretches, many low-lying areas, including colonies and markets, were inundated as well on Monday.