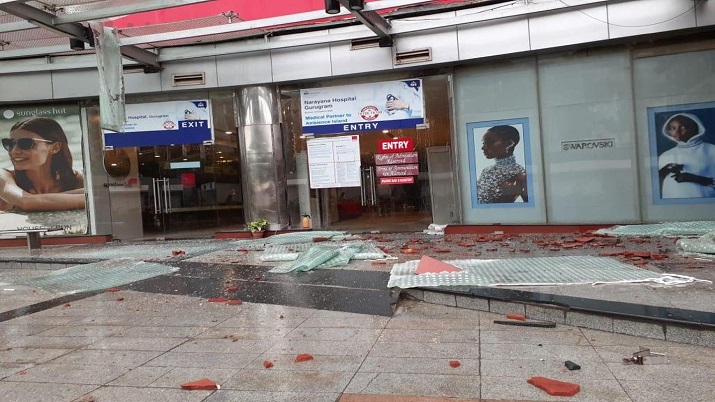 A portion of the roof of the Ambience Mall collapsed on Monday following heavy rainfall in Haryana’s Gurugram. The parts of the false ceiling on the third floor collapsed and came crashing down. The mall’s basement was inundated amid heavy rains, reports said.

The mall has been closed as a precautionary measure. No casualties have been reported in the incident so far.

Meanwhile, the death toll in the three-storey building collapse incident in Khawaspur in Haryana’s Gurgaon district on Monday reached two after the body of one more person was pulled out from under the rubble, police said.

Amid heavy rains, the rescue operation was going on at the site where the building had collapsed on Sunday evening, a police official said.

The rescuers were looking for one more person believed to be still trapped under the debris, he said.

The official said that while earlier five to six workers were believed to have been trapped under the rubble, but after verifying details of who were present at the site when the building collapsed now only one person was stated to be trapped under the rubble after two bodies had been pulled out, while another one was brought out alive though he had sustained injuries.