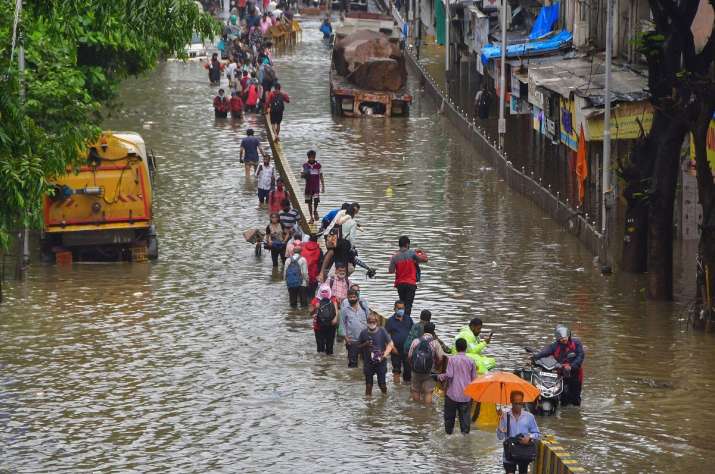 The India Meteorological Department (IMD) sounded a ‘red alert’ for Mumbai and other districts in the Konkan region, predicting extremely heavy rainfall at isolated places over the next 24 hours. The weather department said that besides the financial capital, Thane, Palghar, Raigad will receive rains for the next few days.

Mumbai and its neighbouring districts of Thane, Palghar and Raigad have been witnessing heavy rains since the last couple of days. The torrential rains over the weekend claimed 30 lives in the metropolis.

On Monday, five members of a family were killed after a boulder rolled down and crashed on their home due to incessant rains in Thane. Thane Municipal Corporation’s Regional Disaster Management Cell chief Santosh Kadam said the boulder incident took place in the evening in Gholai Nagar, where five people – a husband-wife duo and their three minor children – were buried alive.

As many as seven people were feared drowned at separate places in the state state as Mumbai reeled under downpour for the second day, leading to water-logging and disruption in local train services.

In Ganesh Ghat in Dombivali, a man was washed away while a 9-year-old boy, identified as Abdul Rehman Hurera, was feared drowned in Mira Road. The railway bridge in Vashind was submerged and 25 villages were cut off, while the condition of a bridge in Khadipar in Bhiwandi and Runde in Murbad were similar. In Mumbra, water entered a godown where goats were kept for Bakri Eid celebrations, leading to the death of 15 animals while 14 were saved.

The Masunda lake in Thane city is overflowing, according to the Thane district administration.

In neighbouring Palghar district, 50 villagers were rescued in Nandale in the early hours of the day after they got marooned due to the rains. Around 1,000 people were shifted to safety in the township, with areas like Idgah Road and Mhada Colony being the worst affected.

In another incident, some makeshift homes collapsed in Shivaji Nagar area of Kasara due to rains. Though no was injured, families in the area were shifted and accommodated in a nearby Zilla Parishad school.

Bridges in Vasai, Bhiwandi and Murbad towns in Thane and Palghar districts had been submerged in water due to downpour, leading to heavy disruptions to traffic in these areas.

In Raigad, three people were feared drowned at separate places in the district, which was also lashed by heavy rains.

In Mumbai, the Central Railway (CR) was forced to suspend its suburban train operations on the Main Line three times on Monday. According to the Central Railway, due to extremely heavy rain and water-logging around Kalyan, trains passing via the station were stopped for around one hour since 8.15 pm.

Raj Kundra Arrested: When The Businessman Was Banished From IPL After Confessing To Betting