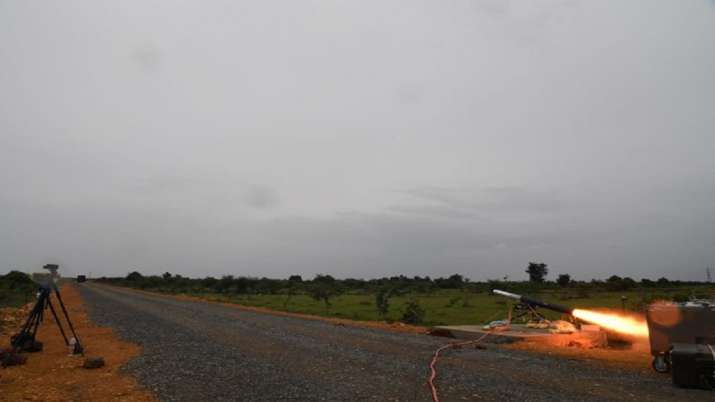 “The missile was launched from a man-portable launcher integrated with thermal site and the target was mimicking a tank. The missile hit the target in direct attack mode and destroyed it with precision. The test has validated the minimum range successfully,” DRDO said.

“All the mission objectives were met. The missile (Man-Portable Anti-Tank Guided Missile) has already been successfully flight-tested for the maximum range. The missile is incorporated with state-of-the-art Miniaturized Infrared Imaging Seeker along with advanced avionics,” DRDO mentioned.

“Some of the components which may be forged from this alloy include slat/flap tracks, landing gear and drop link in landing gear – among several others,” the ministry said in a statement.

The excellent forgeability and high strength-to-weight ratio of the beta titanium alloy facilitates manufacture of intricately configured components for aerospace applications with potential for significant weight savings, it noted.

Their relatively lower lifetime cost, owing to superior corrosion resistance in comparison to steels, is an effective trade-off to justify the use of this expensive material in India too, the ministry said.

The beta titanium alloy, which contains vanadium, iron and aluminium along with titanium, is used by many developed nations as a substitute for the “relatively heavier traditional Ni-Cr-Mo structural steels to achieve weight savings”, it said.

The ministry’s Aeronautical Development Agency (ADA) has identified over 15 steel components which may be replaced by the beta titanium alloy forgings in the near future with a potential of 40 per cent weight savings, the ministry stated.

Defence Minister Rajnath Singh on Tuesday congratulated the DRDO and the industry for indigenous development of the beta titanium alloy.