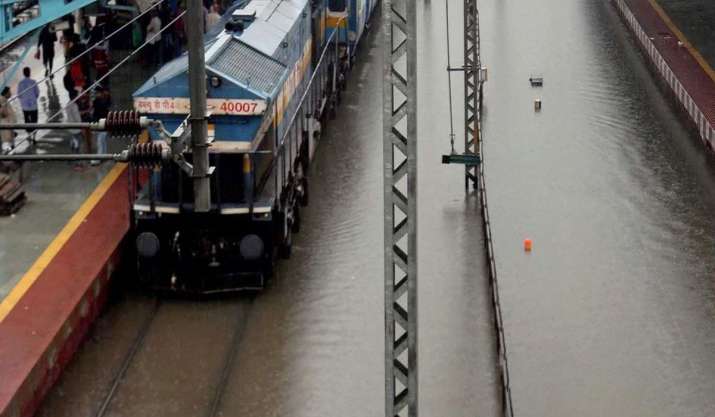 Train services on the Konkan Railway route in Maharashtra’s Ratnagiri district were suspended on Thursday morning following heavy rains in the area, an official said.

Water level at the Vashishti river bridge between Chiplun and Kamathe stations in Ratnagiri crossed the danger mark after the heavy downpour, a spokesperson of the Konkan Railway said.

“In view of the safety of passengers, train services in this section are suspended temporarily,” the spokesperson said.

The Konkan Railway has a 756-km-long track from Roha near Mumbai to Thokur, located close to Mangaluru. The route spread across three states- Maharashtra, Goa and Karnataka – is one of the challenging terrains, as it consists of many rivers, gorges and mountains.

Train services of the Central Railway in the Kasara Ghat section of Thane district and near Lonavala hill town in Pune district adjoining Mumbai were also severely affected after heavy rains caused flooding, washing out of tracks, boulder crashes and mudslides in that region, officials said.

Rail tracks at Umbermali station near Kasara were “submerged up to the platform level” and there were boulder crashes in the Ghat section.

“Train services were suspended,” district authorities said, adding that work to remove the boulders was underway.

A bridge at Sapgaon in Sahapur taluka of Thane suffered extensive damage due to the heavy downpour, tehsildar (revenue officer) Nilima Suryavanshi said, adding that no one was injured and traffic movement on the bridge was suspended.