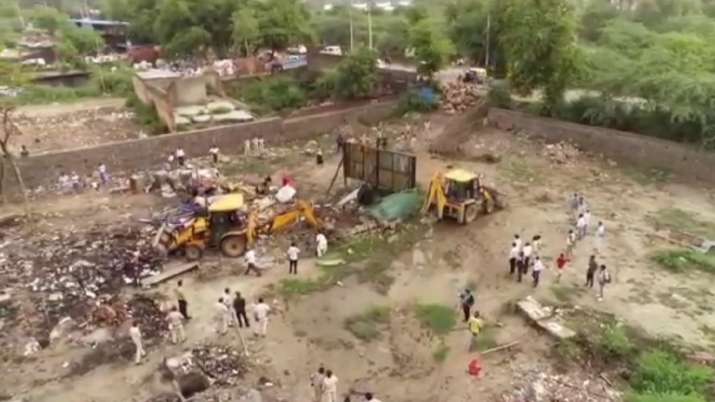 Uttar Pradesh’s Yogi Adityanath government on Thursday demolished illegal structures over 2.10 hectares of land in Delhi’s Madanpur Khadar area. According to reports, the land that belonged to Uttar Pradesh irrigation department was enchroached by Rohingyas.

Bulldozers along with a team of the irrigation department arrived at the spot at about 4 am to remove the structures over the piece of land said to be worth Rs 150 crore. Earlier in March this year, a similar action was taken by the Yogi Adityanath government wherein six acres of land in Delhi’s Sarita Vihar was freed of enchroachment.

“I wrote to the Delhi LG, the Delhi CM and leader of opposition about this issue. The LG gave us full support. Our team went to the site with the JCBs and other machines and was accompanied by Delhi Police and a team from the local administration,” UP Jal Shakti Minister Mahendra Singh had then said.

All other land of UP Government occupied illegally in Delhi will be freed soon, the minister had said.

Ever since coming to power, the Yogi Adityanath dispensation had been taking major action against the land mafia in Uttar Pradesh.

Did you know that Priyanka Goswami had interest in modelling? | Jeetega India e-Conclave