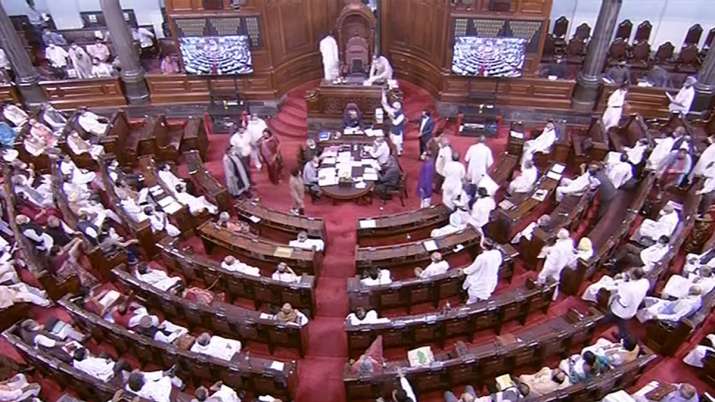 High drama unfolded in the Rajya Sabha on Thursday as the Opposition staged protest over a range of issues. Things got particularly ugly when Trinamool Congress MP Santanu Sen snatched statement paper from Electronics and Information Technology Minister Ashwini Vaishnaw as he rose to speak on the Pegasus snooping controversy. Sen then tore the paper and threw it towards the Deputy Chairman. As soon as Vaishnaw, who was scheduled to make a statement over the alleged phone tapping issue, rose to speak, the opposition MPs rushed to the Well of the House and raised slogans against the government.

Deputy Chairman Harivash urged the protesting MPs to desist from unparliamentary behaviour and go back to their respective seats and let the Minister complete his statement. As Vaishnav started making the statement, TMC MP Shantanu Sen went to his seat and snatched the paper from the Minister and tore it apart, thus preventing him from speaking.

As papers were flung into the air, the Minister could not complete his statement and instead laid a copy of it on the table of the House.

The Chair then adjourned the House till 11 am tomorrow. Earlier today, the House was adjourned twice after Opposition MPs raised the issue of alleged snooping using Pegasus spyware and others.

After adjournment of the House, a verbal feud ensued between BJP MPs and TMC MPs after Sen snatched papers from the Minister and tore it, Marshals had to intervene to bring the situation under control.

The Monsoon Session of the Parliament began on Monday. Both the Houses — Lok Sabha and Rajya Sabha, have failed to transact any business so far due to the continuous uproar by the Opposition members.