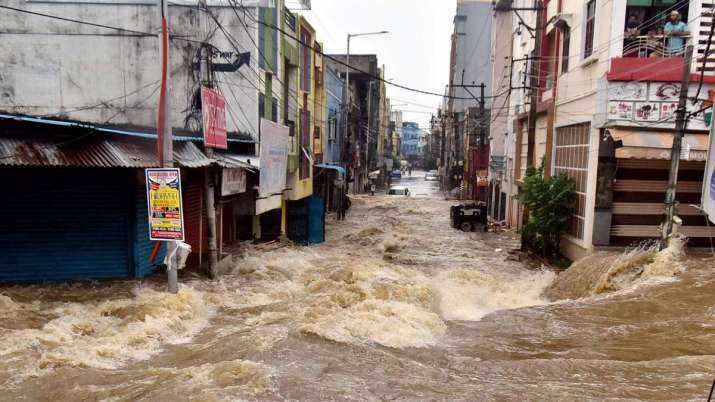 Heavy rains lashed Telangana and parts of Maharashtra on Thursday while sultry weather prevailed in the north, even as the IMD forecast widespread rainfall over the east and central parts of the country in the next two days.

Two people died due to a landslide in Maharashtra’s Ratnagiri which was inundated following heavy rains while the India Meteorological Department (IMD) issued an Orange Alert for the districts of Ernakulam, Idukki, Kozhikode, and Wayanad in Kerala, predicting very heavy rains on Friday.

“A low-pressure area lies over northwest Bay of Bengal and its neighborhood. It is likely to move west-northwestward along the monsoon trough during the next two to three days. Under its influence, fairly widespread rainfall with isolated heavy to very heavy rainfall is very likely over east and adjoining central India from July 22-24 with reduction thereafter,” the Met office said.

In Delhi, the sky remained cloudy and the maximum temperature settled at 34 degrees Celsius, a notch below the season’s average, while the minimum was recorded at 25.6 degrees Celsius, two notches below average, it said.

According to the Met department forecast, the city is likely to receive light rain on Friday.

Meanwhile, Delhi’s air quality was in the “satisfactory” category in the evening. According to the Central Pollution Control Board (CPCB), the hourly air quality index (AQI) stood 74 at 8.40 pm.

Normal life was thrown out of gear in several parts of Telangana as torrential rains battered the state, prompting the state government to initiate relief measures.

According to official sources, Narsapur (G) and two other locations in Nirmal district received extremely heavy rainfall (above 227. 5 mm), while heavy rainfall occurred in many other places in Nirmal, Nizamabad, Adilabad districts from Wednesday morning to Thursday morning.

The provisional average rainfall in the Greater Hyderabad Municipal Corporation (GHMC) during the same period was 17.7 mm, they said.

Several rivulets and water bodies at different places in the state were in spate following the rains and low-lying areas were inundated.

Chief Minister K Chandrasekhar Rao instructed the officials and public representatives to take precautionary measures on a war-footing as the water level was rising in Godavari river catchment areas due to heavy showers in the upper reaches of Sri Ram Sagar Project (SRSP), an official release said.

The chief minister also directed the ministers and MLAs to camp in their districts while Chief Secretary Somesh Kumar held a teleconference with the Collectors and SPs of 16 rain-affected districts and took stock of the prevailing situation.

The IMD said heavy to very heavy rain with extremely heavy rain is very likely to occur at isolated places in Adilabad, Kumaran Bheem Asifabad, Nirmal, and other districts on Friday.

In Kerala, the Met Office asked the fishermen not to venture into the sea till July 26 as it issued a warning for very heavy rains.

“Strong winds with speeds reaching 40-50 km gusting to 60 km are very likely along and off Kerala coast. Fishermen are advised not to venture into these sea areas during the period mentioned,” it said.

An Orange alert was issued for the Kannur district on Friday. The IMD also issued a Yellow alert for all other districts.

A Red alert indicates heavy to extremely heavy rains of over 20 cm in 24 hours, while an Orange alert means very heavy rains from 6 cm to 20 cm of rains. A yellow alert means heavy rainfall between 6 and 11 cm.

Chiplun, Khed, and some other towns in Maharashtra’s Ratnagiri were inundated following heavy rains, with inclement weather and incessant downpour creating difficulties for the government agencies to carry out rescue operations in this district located in the Konkan region, a state minister said.

An official said that two people died due to a landslide near Parshuram ghat in the district during the day.

Earlier in the day, Chief Minister Uddhav Thackeray took a review of the situation in the Ratnagiri and Raigad districts by holding a meeting with the officials. During the meeting, he said that the India Meteorological Department (IMD) has issued an alert of heavy rainfall in this region for the next three days.

Like the national capital, the maximum temperatures hovered close to normal limits at most places in Haryana and Punjab on Thursday as rains eluded the two states.

According to the meteorological department, Ambala recorded a maximum temperature of 32.7 degrees Celsius, while Hisar registered a high of 34.6 degrees Celsius.

Chandigarh, the common capital of the two states, recorded a maximum temperature of 32.5 degrees Celsius.

Meanwhile, several parts of eastern Uttar Pradesh and a few in the western part of the state received light to moderate showers as the monsoon remained active over the state.

According to the Met office, thundershowers are very likely at many places over western Uttar Pradesh and a few places over the eastern part of the state on Friday.