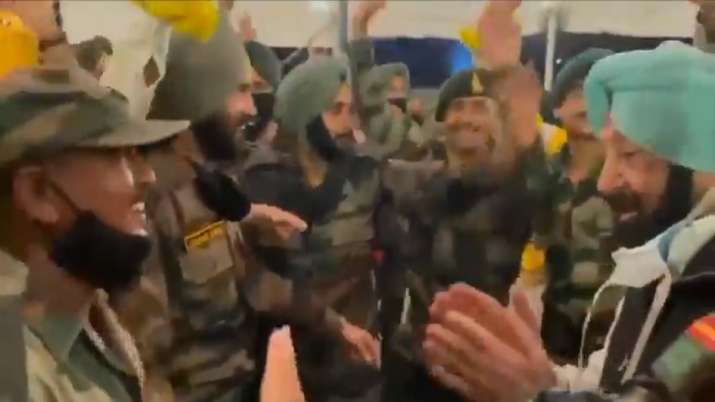 In a break from Navjot Singh Sidhu-related party issues, Punjab Chief Minister Captain Amarinder Singh was seen dancing with the jawans of two Sikh regiments in which he had served on Thursday.

The event was organised to commemorate their 175th Raising Day where Amarinder Singh was seen breaking into dance on Punjabi songs.

Meanwhile, in another development and just a day ahead of Sidhu’s ‘coronation’, Punjab Chief Minister Amarinder Singh extended an invite to all lawmakers for tea on Friday and then attend the ceremony of the new state Congress team taking charge led by Navjot Singh Sidhu.

“Punjab CM Capt Amarinder Singh has invited all Punjab Congress MLAs, MPs and senior party functionaries at Punjab Bhawan for tea at 10 am on Friday. They will all then go to Punjab Congress Bhawan together from there for the installation of the new PPCC team,” Chief Minister’s Media Advisor Raveen Thukral informed in a tweet.

Sidhu sent an invite, signed by some 62 legislators, through working presidents, Kuljit Singh Nagra and Sangat Singh Gilzian, to the ‘sulking’ Chief Minister to attend the swearing-in ceremony.

Earlier, the camp of the Chief Minister was adamant on its demand that Sidhu should first apologise publicly over his purported remarks against the government over the power crisis and the sacrilege issue and then he would meet him.

In a first show of solidarity and strength, Sidhu, accompanying 62 legislators, comprising four Cabinet ministers, on Wednesday paid obeisance at the Golden Temple in Amritsar.

However, the Chief Minister and his close confidants were absent from Sidhu’s maiden visit to his constituency Amritsar (East) and religious places there.