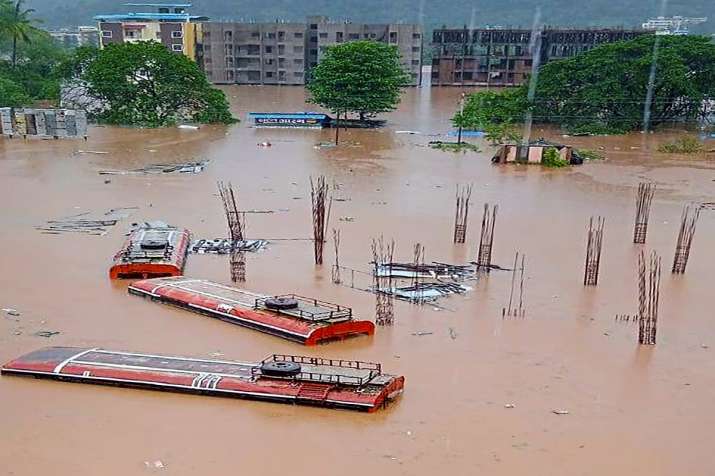 Heavy rains lashed most parts of Maharashtra, including Mumbai, Konkan, Kolhapur, and other districts of the state. Four landslides were reported in Raigad late Thursday night. Meanwhile, as many as 47 villages were cut off in Kolhapur district after roads leading to them were submerged in water due to heavy rains, and 965 families were shifted to safer places, while the Panchganga river hovered near the danger mark.

At least 10 state highways, 29 district highways and 18 rural roads were closed for traffic due to flooding at various stretches in Maharashtra. Two teams of the NDRF were rushed to Ratnagiri’s Khed and Chiplun areas to tackle critical situations due to high tide and heavy rain.

Images and videos showed cars and buildings submerged in water. “Alarming water level in Chiplun,” a resident took to Twitter to sought help from CM Thackeray. “It has risen almost up to first floors. People stuck in their houses…Please send help.”

The national forecasting agency India Meteorological Department (IMD) has issued red and orange alerts for several regions in the state that are set to receive heavy rainfall in the next three days.

Earlier on Thursday, Maharashtra Chief Minister Uddhav Thackeray held an emergency meeting to take stock of the flood situation in Ratnagiri and Raigad districts in the state, caused by torrential rains that have battered the region over the past 24 hours.

Local Police rescued 15 people, at least 30 people still trapped inside. Four incidents of landslide were reported in Raigad which has blocked the road. Rain has washed away the road to Talai village, which is causing problems, Nidhi Chaudhary, Dist Collector Raigad, Maharashtra told ANI

Maharashtra government has sought help from the central government. Army’s help was sought for the people trapped in Mahad. NDRF team is having trouble reaching the affected villages as roads are submerged underwater:  Raigad Guardian Minister Aditi Tatkare

6:48 am | Landslide reported in Kalai village