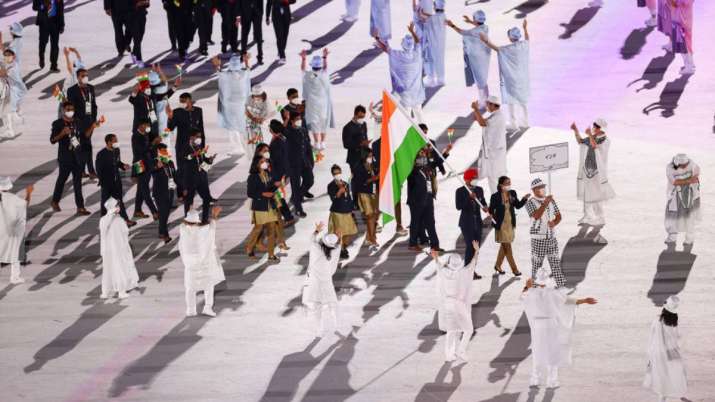 Tokyo Olympics 2020: The Tokyo Olympics, delayed by a year and hit by unexpected COVID-19 breakout, are finally set to get underway from July 23 with the much-awaited opening ceremony at Japan National Stadium. The ceremony will be held mostly without spectators to prevent the spread of coronavirus infections, although some officials, guests and media will attend.

In its 100-year-old Olympic journey, India has bagged 28 medals at the quadrennial event, both in the individual and team events, which include nine gold, seven silver, and 12 bronze medals. Indian paddlers Achanta Sharath Kamal and Manika Batra, who are set to represent the country in mixed doubles, have decided against attending the ceremony as they have their opening match the following day.

18:30 IST: PM Modi catches glimpses of the opening ceremony and cheers for Indian athletes in Tokyo.

18:15 IST: Earlier in the ceremony, the IOC honoured Mohammad Yunus, Bangladesh-based economist and Nobel Laureate, with a special award.

17:42 IST: The Tokyo Olympics opening ceremony started with a blaze of indigo and white fireworks lighting the night sky.

17:31 IST:  Wood from 160 pines and spruces, seeds that came from Canada, Ireland and Northern Europe, were used to build the set of Olympic rings displayed Friday.

17:11 IST: Athletes from more than 200 nations begin the Olympic parade. The Indian contingent is ready!

16:58 IST: Mount Fuji, the highest mountain in Japan, has been incorporated the Olympic Flame cauldron. Tributes are also paid to the Israeli delegation that was killed at the Munich Games in 1972. A moment of silence has been offered.

16:50 IST: The organizers pay tribute to those who’ve lost their lives due to the coronavirus pandemic. The Tokyo spectacle is set to take place under heavy restrictions after a year’s delay owing to the unexpected coronavirus outbreak.

16:45 IST: It is the second time in Tokyo’s history that it will host the Olympic Games.

16:40 IST: Fireworks illuminate over the National Stadium to mark the start of the opening ceremony. A number of athletes were featured in a video that started with the moment Tokyo won the Olympic bid in 2013.

16:31 IST: The ceremony is finally underway!

16:10 IST: Sathiyan has got a first-round bye. Later, he is set to face either Brian Afanador or Lam Siu Hang in the second round.

16:00 IST: Mary Kom will be gunning for her second Olympic medal in Tokyo. And going by her record so far, she probably has a good chance of achieving the feat. She had clinched a bronze in the flyweight (51kg) at the 2012 Games in London, where women’s boxing made its Olympics debut.

15:15 IST: Celebrated boxer M C Mary Kom and men’s hockey team skipper Manpreet Singh will be India’s flag bearers of the opening ceremony. Instead of 20 athletes, 19 will be seen at the ceremony with tennis player Ankita Raina replacing the table tennis stars. Six officials will accompany them.

Earlier in the day, ace Indian archer Deepika Kumari finished a creditable ninth after the women’s individual ranking round, notching up a total of 663 points. She will now have an easy first-round outing against world No.193 Karma of Bhutan, who finished 56th in the ranking round.

Indian men’s archers had a dismal outing as they finished in the bottom half of the table. Pravin Jadav finished 31st with 656 points, followed by India’s No.1 Atanu Das (653 points) at 35th and Tarundeep (652 ) two spots below him at 37. The round was dominated by Korean archers.

A 228-strong Indian contingent comprising 119 athletes will be looking to better its tally of one silver and one bronze from the previous Olympics in Rio. Out of the 119 athletes, 67 are male and 52 are female participants. This will be India’s largest-ever contingent of athletes at the Olympics. A total of 117 athletes had competed in Rio, where India returned with two medals — a silver coming from PV Sindhu and a bronze by Sakshi Malik.

At what time does Tokyo Olympics 2020 opening ceremony start?

When is Tokyo Olympics 2020 opening ceremony?

Tokyo Olympics 2020 opening ceremony is on July 23 (Friday) at the Japan National Stadium.

How do I watch live streaming of the Tokyo Olympics 2020 opening ceremony?

You can watch Tokyo Olympics 2020 opening ceremony on SonyLiv/JioTV.