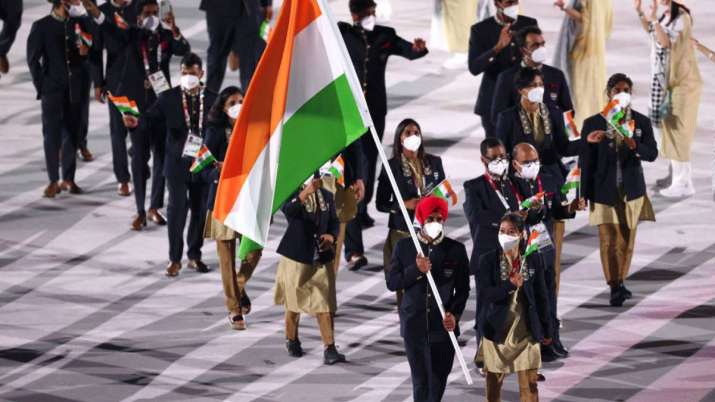 Belated and beleaguered, the virus-delayed Tokyo Summer Olympics finally opened Friday night with a dazzling display of fireworks and soaring, made-for-TV choreography that unfolded in a near-empty stadium, a strangely subdued ceremony that set a striking tone to match a unique pandemic Games.

As their opening unfolded, devoid of the usual crowd energy, the Olympics convened amid simmering anger and disbelief in much of the host country, but with hopes from organizers that the excitement of the sports to follow would offset the widespread opposition.

Trepidations throughout Japan have threatened for months to drown out the usual carefully packaged glitz of the opening. Inside the stadium after dusk Friday, however, a precisely calibrated ceremony sought to portray that the Games — and their spirit — are going on.

A total of 19 Indian athletes, including flag-bearers iconic boxer MC Mary Kom and men’s hockey team captain Manpreet Singh, besides six officials, participated in the ceremony. The country has a 228-strong delegation in Tokyo, including over 120 athletes.

Early on, an ethereal blue light bathed the empty seats as loud music muted the shouts of scattered protesters outside calling for the Games to be cancelled — a widespread sentiment here. A single-stage held an octagon shape meant to resemble the country’s fabled Mount Fuji.

Organizers held a moment of silence for those who had died of COVID; as it ticked off and the music paused, the sounds of the protests echoed in the distance.

Athletes marched into the stadium in their usual parade of nations, some socially distanced, others clustering together in ways utterly contrary to organizers’ hopes.

They waved enthusiastically to thousands of empty seats, and to a world hungry to watch them compete but surely wondering what to make of it all.

The much-awaited event didn’t resemble the glitzy opening ceremonies of London 2012 and Rio 2016 involving thousands of performers in packed stadiums. Nonetheless, the event marked the start of the Tokyo spectacle after a year’s delay.

‘United by Emotion’ was the theme of the evening which opened with a countdown video dating back to the time when Tokyo won the bid to host the Games in 2013. It was followed by a 20-second indigo and white fireworks display.

Olympic rings made from the wood of trees planted from seeds brought to the country the last time it hosted the Olympics in 1964 were formed before the traditional Parade of Nations.

Tennis star Naomi Osaka, in the end, lit the cauldron on the main stage, atop an octagonal mountain inspired by Mount Fuji, the tallest peak of Japan.