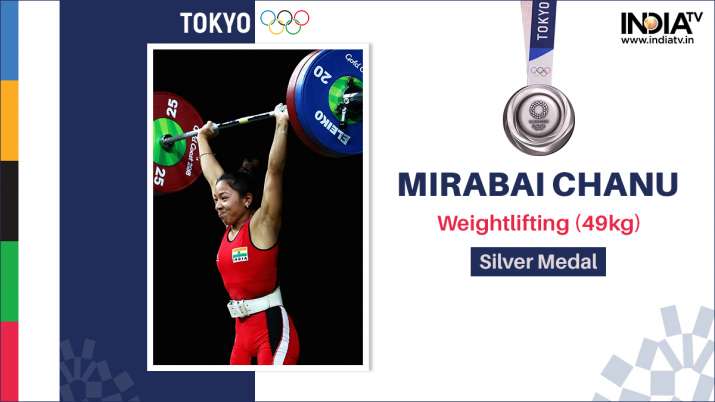 The 26-year-old lifted 87kg in snatch and 115kg in the Clean and Jerk event to score a total of 202 during the 49kg category final to create Indian history.

With the silver medal, Chanu has also opened India’s medal account at the 2020 Tokyo Olympics.

China’s Hou Zhihui clinched the gold medal in the event, while the bronze medal was won by Indonesia.

Chanu was seen as one of India’s strongest medal contender at the Olympics this year and was in fine form in the build-up to the Games. She had created the Clean and Jerk world record in April earlier this year in her category, lifting 119kg.

In the final, China’s Zhihui created an Olympic record by lifting 94kg in the snatch event. She led the table after the end of snatch, while the Chinese also topped the chart in the Clean and Jerk event, lifting 116kg — another Olympic record.

This was Chanu’s second appearance at Olympics. In the Rio edition in 2016, she had failed in her first snatch attempt of 82kg. On her second attempt, she was able to lift 82kg before failing in the third attempt at 84kg. She also flunked all three attempts in the Clean and Jerk.

However, the weightlifter made tremendous amends in her second outing in Tokyo. Chanu completed her first and second snatch attempts at 84kg and 87kg respectively, before failing the 89kg attempt. In the Clean and Jerk event, she successfully lifted weights of 110kg and 115kg.