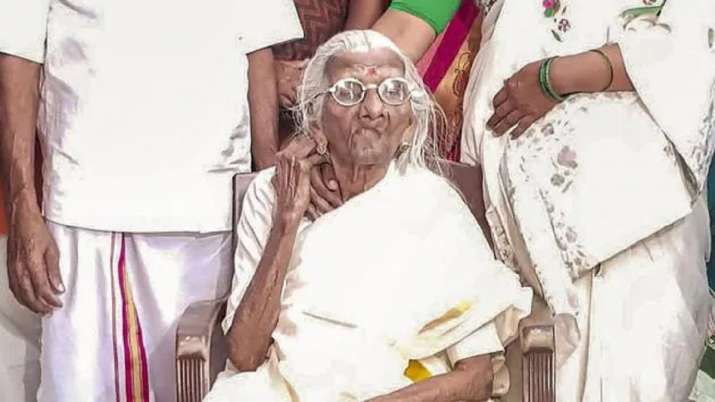 Kerala’s oldest learner Bhageerathi Amma, who passed the literacy examination at the age of 105 two years ago and won the praise of Prime

Minister Narendra Modi, died, family sources said. She was 107 years old and breathed her last late on Thursday night at her house due to age-related ailments,they said.

Hailing from Prakkulam in Kollam district, the centenarian was a recipient of the prestigious Nari Shakti Puraskar by the Central government for her exceptional contribution towards women’s empowerment. Condoling her death, Governor Arif Mohammed Khan said Bhageerathi Amma personified sheer determination to become literate.

Chief Minister Pinarayi Vijayan said she was an inspirational personality who stood as a symbol of women’s empowerment and literacy movement in society. Bhageerathi Amma had scripted history by becoming the oldest student by clearing the fourth standard equivalency examination conducted by the state-run Kerala State Literacy Mission (KSLM) in 2019. The woman had appeared for the examination, conducted by the state literacy mission, at Kollam and came out with flying colours with 205 out of a total of 275 marks and full marks in Maths.

KSLM sources here said due to her advanced age, Bhageerathi Amma had difficulty in writing the exams and took three days to complete the three question papers on Environment, Mathematics and Malayalam.

The woman, who had always yearned to study and gain knowledge, had to give up her dream of educating herself after her mother died as she had to take care of her younger siblings.

Bhageerathi Amma had quit formal education in class three at the age of 9.

Her passion for studies had won accolades from none other than Prime Minister Narendra Modi. While narrating the story of Bhageerathi Amma, Modi had said in his radio address last year that, “If we wish to progress in life, we should develop ourselves, if we wish to achieve something in life, the first pre-condition for that is the student within us must never die.”

She left without fulfilling the dream of passing the 10th standard equivalency exam, family sources said. Bhageerathi Amma has 12 grand and great-grandchildren. One of her six children and three of her 15 grandchildren are no more, they added. Education Minister V Sivankutty and Assembly Speaker M B Rajesh were among those who condoled the death.