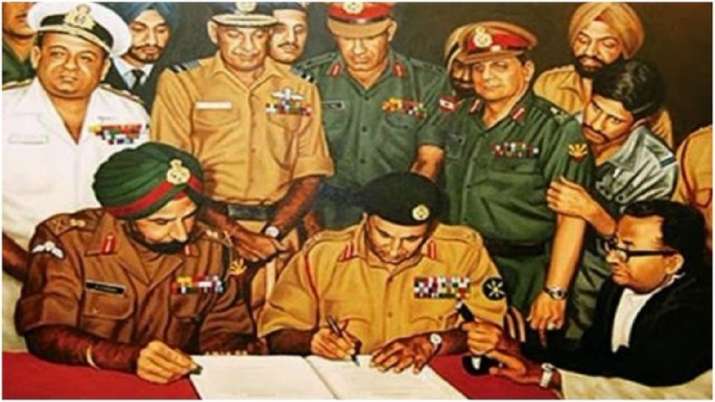 At a time when Pakistan and Afghanistan relations are facing a bitter state of affairs, Afghanistan Vice President Amrullah Saleh took a jibe at  Islamabad by posting an old picture of the Pak army’s surrender to the Indian Army in the 1971 Bangladesh Liberation War.

“We don’t have such a picture in our history and won’t ever have. Yes, yesterday I flinched for a friction of a second as a rocket flew above & landed few meters away. Dear Pak twitter attackers, Taliban & terrorism won’t heal the trauma of this picture. Find other ways,” Saleh wrote on Twitter.

However, Pakistan Federal Minister for Information & Broadcasting, Fawad Hussain was quick to hit back at the Afghanistan Vice President calling him a ‘hyena’.

Hussain also took to Twitter and said, “Afghanistan belongs to brave people of Afghanistan unlike hyena’s like you.”

Hussain further said, “a bunch of you have little interest in Afghanistan or even this region you are just a scavenger will fly to safe heavens when the time ll be up…” Several other Pakistani ministers jumped into the argument, trying to save the country’s face.

Pakistan and Afghanistan relations are not going any good at a time when US troops are leaving the latter country, and the Taliban getting aggressive in its capture or control tactics.

But in much-needed relief, the US carried out airstrikes across Afghanistan in the last several days as part of an effort to support the Afghan security forces fighting Taliban insurgents.

The news of US airstrikes in Afghanistan came a day after America’s most senior military officer admitted that the Taliban had gained “strategic momentum,” with their forces now controlling about half of Afghanistan’s more than 400 district centres.

The Pentagon, however, refrained from giving any specifics of its airstrikes in Afghanistan.

“Without speaking to specifics, I can say that in the last several days, we have acted through airstrikes to support the ANDSF (Afghan National Defense and Security Forces) but I won’t get into tactical details of those strikes,” Pentagon Press Secretary John Kirby told reporters.