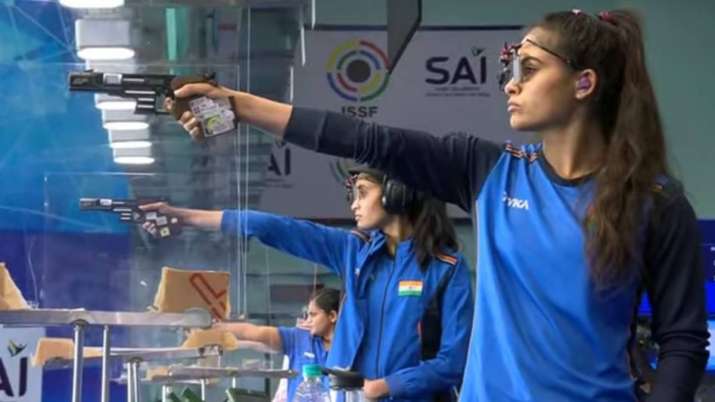 06:18 AM: A glance at Yashaswani Deswal’s detailed performance so far.

06:16 AM: Reports have surfaced that the reason Manu took a break midway series 2 was she had a problem with her pistol. Fans would be having it’s nothing serious and her performance suggests everything’s fine now as she is shooting a flurry of 10s.

05:56 AM: Yashaswini is finding it hard to maintain consistency too as after getting 94 in series 1, she shot 2 10s, squeezed between two 9s in series 2; dropping her to 28th place.

05:52 AM: Meanwhile Yashawani takes the inroad to 25th position as so far as she recovered with 7 10s out of her 14 shots (rest fetching 9s)

05:47 AM: Manu is actually tied at the top with Latvia’s Agate Rasmane, who leads by the virtue of more shots in the innermost circle.

05:45 AM: BULLSEYE! Bhaker climbs to 3rd after five of her last shots in the series 1 are a perfect 10; taking her total at the end of the first series at 98.

05:39 AM: Yashaswani is currently struggling at 41st place with just one shot on 10 among her first five shots; remaining on the third innermost circle as 9 pointers.

05:38 AM: After the first five shots in series 1 (10 shots), Manu Bhaker has accumulated 48 points (out of 50) with her last two shots fetching 9 after three 10s on the trot. She is currently placed 9th in the leaderboard.

05:37 AM: To rejig reader’s memory on the rules, out of the competing 53 shooters, only eight will qualify for the finals with each shooter getting to shoot 60 shots over 6 series with max point available per shoot is 10.

05:33 AM: Bhaker is off to a perfect start as she shoots 10 in her first of the 60 shots in the qualification round

05:25 AM: Earlier on Day 1 in shooting, India’s brightest hopes in pistol events in Saurabh Chaudhury returned empty hand in the men’s 10m air pistol individual event after he finished seventh in the final. He did stir hopes when he finished third in the qualification round and had an impressive run of 16 perfect 10 shots at the target.

05:23 AM: Manu Bhaker has been among India’s biggest hopes from the shooting contingent at the Olympics after the teenage shooter shot to fame three years ago at the 2018 Commonwealth Games.

05:14 AM: Full schedule of India from Day 2 with action beginning shortly in women’s individual 10m air pistol final qualification event from 5:30 AM.

05:07 AM: Welcome to the live blog of the 2020 Tokyo Olympics. After the highs of Day 1 where Mirabai Chanu opened India’s medal account with a silver, there’s plenty of action in store from Day 2 for India with medal hopes in multiple shooting events and some big names from other disciplines in action as well. Stay tuned as we will share the entire Indian schedule from Day 2 soon.

With stars like PV Sindhu, MC Mary Kom, Manu Bhaker, Sania Mirza-Ankita Raina, Maana Patel and Manika Batra in action on the second day of the Olympics, Indian fans will pin their hopes on female athletes to clinch silverware in Tokyo, especially after witnessing Mirabai Chanu’s exuberance on the previous day.

After the shooting contingent’s disappointing start on Saturday, Indian fans finally had something to cheer about. Chanu ended India’s 21-year-long wait by clinching the nation’s first Olympics silver medal in weightlifting. Mirabai exorcised the ghost of the 2016 Rio Olympics by bagging India’s second medal in the sport after Karnam Malleswari’s bronze at the 2000 Sydney Olympics.

The 26-year-old lifted 87kg in snatch and 115kg in the clean and jerk event to score a total of 202 during the 49kg category final to etch her name on the record books. Tennis star Sumit Nagal also had an impressive outing in his opener. He became only the third Indian to win a men’s singles match at an Olympics edition and the first in 25 years.

The Indian men’s hockey team also recorded a 3-2 win against New Zealand to start their campaign on a high. The women’s team, however, suffered a crushing 1-5 defeat against the Netherlands.

Boxer Vikas Krishan and judoka Shushila Devi had forgettable outings as they bowed out in their opening round clashes. Pistol marksman Saurabh Chaudhary and rifle ace Elavenil Valarivan also missed out on the opportunity to bag top honours in Tokyo.