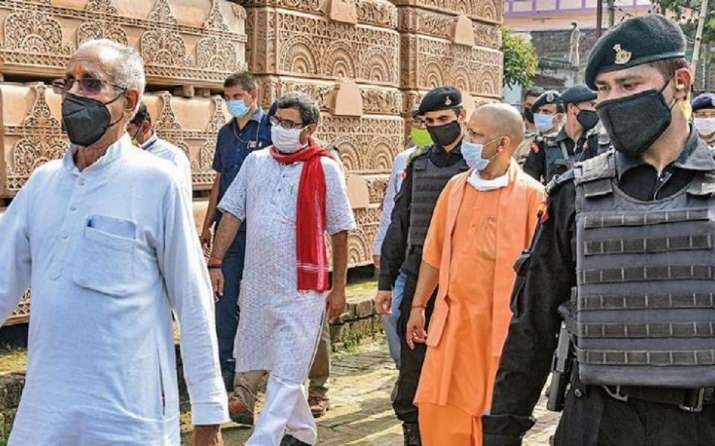 Uttar Pradesh Chief Minister Yogi Adityanath is scheduled to visit Ayodhya on Sunday. According to the details, the chief minister will arrive in the temple town at 1 pm, where he will visit Ramlala. The chief minister will also review the development works in Ayodhya. He will inspect Dashrath Medical College, along with the new oxygen plant being constructed in the town. Yogi Adityanath will also visit the Ram Janmabhoomi site to inspect the progress made in the construction of the temple.

Earlier on Friday, the Bahujan Samaj Party (BSP) chief Mayawati held a ‘Brahmin Sammelan’ in the town. Announcing the event, Mayawati had earlier said, “BSP will hold ‘Brahmin Sammelan’ on July 23 in Ayodhya ahead of the polls in the state. I am very hopeful that Brahmins will not vote for the Bharatiya Janata Party (BJP) in the next Assembly polls.”

The development comes ahead of the Uttar Pradesh polls.

In another development from Ayodhya, the local police went into a tizzy Saturday evening after a man “under the influence of alcohol” called and told them that a bomb was planted at the Hanumangarhi temple in the district, officials said. The call was received at police control room number 112 around 9 pm, they said.

The temple in the Saadat Ganj area on the outskirts of Faizabad city is near the entry gate of the Faizabad Cantonment.

The police immediately swung into action and evacuated the temple premises and a bomb disposal squad was called in, the officials

“The temple was evacuated immediately and thoroughly searched by the bomb disposal team. We found nothing,” Ayodhya Senior Superintendent of Police Shailesh Pandey said.

“We have identified the caller as Anil Kumar. He is a resident of Kanpur but lives in Faizabad. We have arrested him. He was under the influence of alcohol and has admitted that he has made the fake call,” the SSP added.

“Legal action against him is underway,” he said.