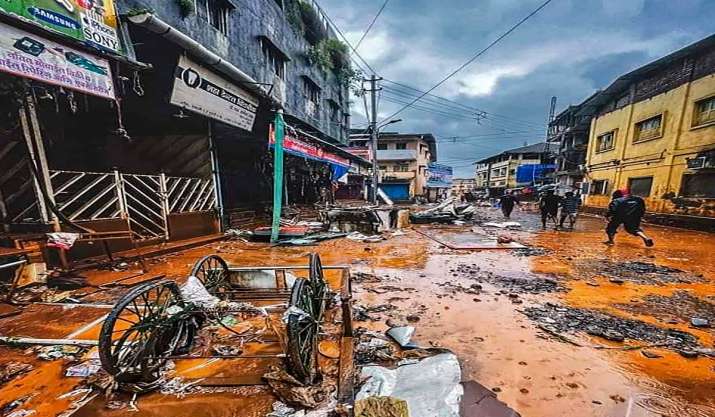 More than 100 people have lost their lives in rain-related incidents, 99 still missing in Maharashtra till Saturday night, said the Relief and Rehabilitation Department. At least 53 people were injured in rain-related incidents. As per the state government’s data, about 1 lakh 35 thousand people have been evacuated from the flood-affected areas. Also, floodwater has entered the roads and fields, submerging many areas of the Sangli district. The Krishna river in Sangli and Panchganga in Kolhapur are in flood though the rains have subsided. The India Meteorology Department (IMD) said rainfall intensity along the west coast was expected to decrease over the next 24 hours.

Maharashtra Chief Minister Uddhav Thackeray will be visiting flood-affected areas of Maharashtra. Parts of Raigad, Ratnagiri districts in the coastal Konkan region and Kolhapur district in western Maharashtra, have been worst affected by the floods. Yesterday, Thackeray visited the worst-hit Taliye village near Mahad, where more than 50 people perished under a hillside on Friday.

NDRF said its 34 teams are engaged in relief and rescue operations in Mumbai, Thane, Ratnagiri, Palghar, Raigad, Sahara, Sangli, Sindhudurg Nagar and Kolhapur in coordination with the state administration. Additional eight teams are being airlifted to Maharashtra– four each from Kolkata and Vadodara. Also, 3 units each of Indian Army and Indian Coast Guard, 7 of Indian Navy and 1 of Indian Air Force, besides local authorities, are engaged in the rescue operations nonstop since the past over 24 hours.

7:42 am | Death toll in Satara rises to 28 with six bodies recovered at landslide site

With six bodies being recovered from the landslide-hit Mirgaon village, the death toll in rain-related incidents in Western Maharashtra’s Satara district rose to 28 by late Saturday evening while at least 14 persons are still missing. As many as 379 villages in the district were affected due to heavy rains over the last three days and more than 5,000 people were shifted to safer places, as per the local administration.

Seven persons have died in rain-related incidents in Western Maharashtra’s Kolhapur district so far while more than 75,000 people have been shifted to safer places. As many as six teams of the NDRF and a column of the Army carried out rescue operations in the flood-hit areas.

6:27 am | IAF airlifts relief materials and NDRF in continuation of flood relief efforts in Maharashtra | VIDEO

6:00 am | Around 1 lakh 35 thousand people evacuated from the flood-affected areas

About 1 lakh 35 thousand people have been evacuated from the flood-affected areas. A total of 112 deaths have been reported and 3221 animals have died. A total of 53 people were injured and 99 are missing, said Relief and Rehabilitation Department

ALSO READ: Rainfall activity to reduce over west coast during next 24 hours: IMD

Tokyo Olympics 2020: What will be special today?