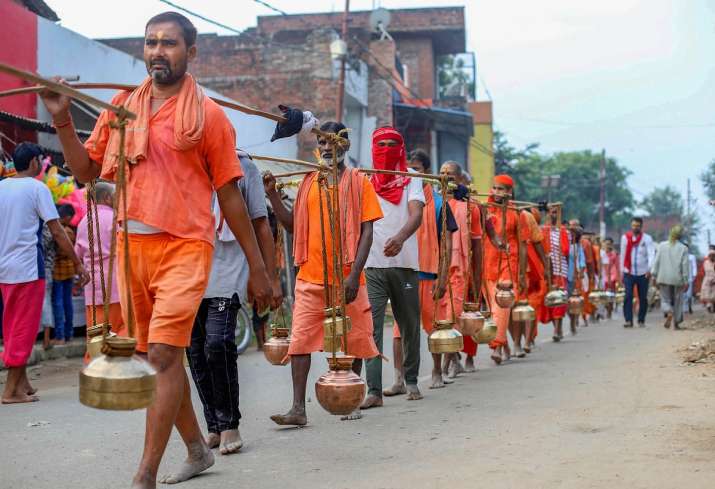 Ahead of the commencement of ‘Sawan’ month today, the Haridwar administration has said that they will strictly watch state borders to prevent devotees from entering Haridwar for the pilgrimage.

This day marks the beginning of the Kanwar Yatra. This year, owing to the COVID-19 pandemic the Yatra has been cancelled in Uttrakhand. As per Abudai Krishnaraj, senior superintendent of police (SSP), Haridwar, entry at ‘Har ki Pauri’ has been restricted as well.

“Restrictions on Kanwar Yatra to be implemented strictly with 24-hour duty at the border. Entry at ‘Har ki Pauri’ has also been restricted. Surveillance has been increased on all routes to ensure pilgrims don’t enter the state. If they do, action to be taken against them,” he said.

The SSP also informed that the Haridwar administration has spoken to DMs across the state to arrange shuttle buses for pilgrims entering (despite restrictions).

“They will be respectfully taken to a nearby temple to offer water and will be sent back,” Krishnaraj added. Haridwar administration has also not allowed the setting up of Kanwar market around Har ki Paudi river bank. Boundaries of Haridwar district have been sealed to prevent the entry of Kanwariyas from across India and Har ki Paudi ghat for the festival.

The administration has recently ordered the sealing of Har Ki Pauri ghat for Kanwariyas by putting barricades from July 24 to August 6. The decision was taken during an inter-state border meeting in Haridwar in which officers of Uttar Pradesh, Himachal, Punjab, Delhi and Haryana were present.

Apart from Uttarakhand, Uttar Pradesh, Bihar, Jharkhand and Delhi have also banned the Kanwar Yatra to avoid overcrowding and prevent the spread of COVID-19.

Kanwar Yatra is an annual pilgrimage in which devotees of Lord Shiva travel by foot or via other means to collect sacred Ganga water from Haridwar, Gaumukh and Gangotri in Uttrakhand and Sultanganj in Bihar to offer at Shiva shrines in their respective regions.