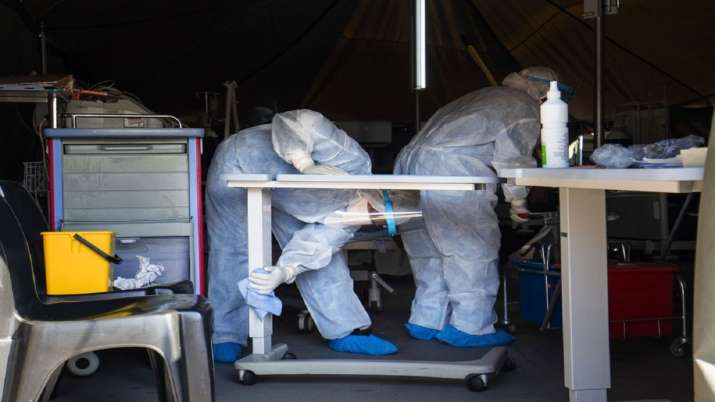 South African President Cyril Ramaphosa has announced the lifting of certain coronavirus-restrictions, including relaxation on inter-provincial travel, sale of alcohol and larger public gatherings, as the country recorded a dip in new COVID-19 cases.

In an address to the nation on Sunday evening, Ramaphosa said South Africa, with immediate effect, will move to Level 3 from the current Level 4 of the five-level lockdown strategy.

He said the Level 4 restrictions, which have been in place for a month now, were being lifted as there was a reduction in new infections and deaths in the third wave of the pandemic. He said some restrictions would still remain in place as fears persist regarding the highly transmissible delta variant.

As part of Level III lockdown, a curfew will remain in place from 10 pm to 4 am and funeral services will still be restricted to a maximum of 50 people with strict protocols in place.

Indoor venues can cater for a maximum of 50 people at a time or for only 50 per cent of their capacity if they are smaller, while events outdoor may not have more than 100 people attending. This includes religious, political and social gatherings.

Schools will also reopen nationwide on Monday after a month-long break.

Ramaphosa said the sale of alcohol would be allowed from Monday to Thursday between 10 am and 6 pm.

Non-essential businesses such as restaurants, taverns, bars and fitness centres, which had to close their doors during the Level 4 restrictions, may now remain open until 9 pm.

“The latest figures suggest that we have largely passed the peak of the third wave of infections, although there are areas in the country where we still need to be concerned because the rates of infection have not yet shown signs of decline.

“The measures that we put in place for the past 28 days, alongside the continued adherence of South Africans to basic health precautions, have been effective in reducing the rate of infection,” Ramaphosa said.

“In all these cases, infections are being driven by the Delta variant (first detected in India), which as we said before is far more transmissible than previous variants,” Ramaphosa said.

The president announced a stepped up vaccination campaign to address the pandemic.

“As we have always said, our most effective weapon in the fight against COVID-19 is an effective and comprehensive vaccination programme.

In the last few weeks, our vaccination campaign has made huge strides.

“We are now administering more than 240,000 vaccines every week day. A month ago, this figure stood at around 100,000 vaccines per week day. As a result, we have now administered more than 6.3 million vaccines, with over 10 per cent of our population having received a vaccine dose,” Ramaphosa said, adding that in the coming weeks the number of vaccination centres would increase and they would be operating on weekends as well.

“We will now allow people between the ages of 18 and 34 to be vaccinated from the 1st of September 2021. This will be in addition to the age groups that are currently eligible, which is everyone over 35 years of age,” the president said, pointing at the increased procurement of doses.

“Within the next two to three months, we are scheduled to receive around 31 million additional doses from Pfizer and Johnson & Johnson. This supply pipeline means that there will be sufficient vaccine doses available for the rest of the year,” he said.

Shortly before Ramaphosa’s address, the National Institute for Communicable Diseases announced that 9,718 new COVID-19 cases had been recorded in the preceding 24 hours, with 287 new COVID-19 related deaths.