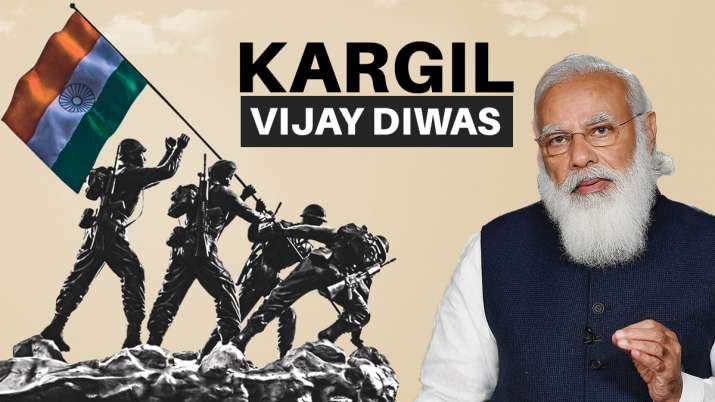 Paying tributes to the soldiers who made the supreme sacrifice in the Kargil war, Prime Minister Narendra Modi on Monday said their bravery ‘motivates us every single day’. On the Kargil Vijay Diwas, which marks India’s victory over Pakistan in the war, Modi said the country remembers the sacrifice and valour of its soldiers.

PM Modi also shared an excerpt from last year’s Mann Ki Baat – a monthly radio programme addressed by him on the last Sunday of every month.

“We remember their sacrifices. We remember their valour. Today, on Kargil Vijay Diwas we pay homage to all those who lost their lives in Kargil protecting our nation. Their bravery motivates us every single day,” he tweeted.

Ram Nath Kovind, the President of India and Supreme Commander of the Indian Armed Forces, will be participating in 22nd Anniversary of Kargil Vijay Diwas. He will visit a High Altitude Warfare School in Gulmarg. The President was slated to visit to Dras in Ladakh. But his visit was cancelled due to bad weather. In 2019, bad weather had prevented the President from visiting Drass to participate in the Kargil Vijay Diwas, and instead, he paid his tributes by laying a wreath at a war memorial at the Army’s 15 Corps headquarters in Badamibagh.

Vice President M Venkaiah Naidu also paid tributes to the heroes of the 1999 Kargil War, recalling their valour and sacrifice.

“On Kargil Vijay Diwas, I join the nation in remembering our armed forces’ saga of valour & gallantry. I salute the heroes of the Kargil war & Operation Vijay and pay my respectful homage to the martyrs for their supreme sacrifice,” the Vice President Secretariat tweeted, quoting Naidu. “The nation will remain forever grateful to them & their families.”

Defence Minister Rajnath Singh today bowed to the indomitable valor and sacrifice of the Indian Army, on the occasion of Kargil Vijay Diwas. In his video message, Singh said, the victory achieved by the Indian Army in Kargil, in spite of difficult and unfavourable condition is incomparable.

Meanwhile, the Bharatiya Janata Party (BJP) has shared a video of former Prime Minister Atal Bihari Vajpayee who led the NDA government at the time of the war.

In 1999, the Indian armed forces defeated attempts by Pakistan to capture strategic heights in Kargil. It was named ‘Operation Vijay’.