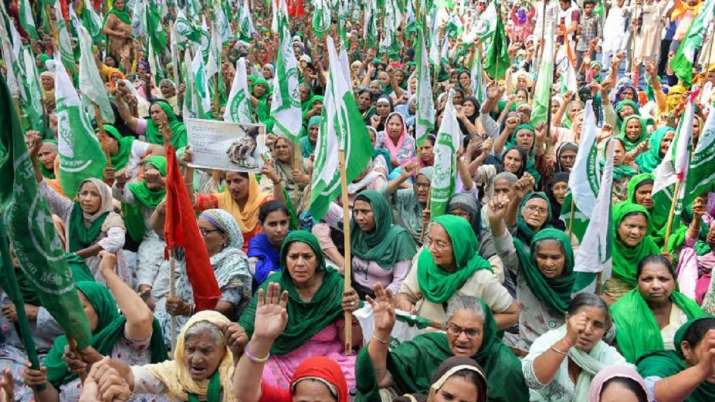 As the farmers’ protest completes eight months, women farmers are set to conduct the ongoing ‘Kisan Sansad’ at Jantar Mantar in Delhi today. Thousands of farmers at Delhi borders have been pressing for their demand to repeal the three farm laws enacted last year. According to a statement by the Samyukt Kisan Morcha (SKM), several convoys of women farmers were reaching the Delhi borders to join the ‘Mahila Kisan Sansad’.

“Tomorrow’s Kisan Sansad at Jantar Mantar will be conducted entirely by women. The Mahila Kisan Sansad will reflect the key role that women play in Indian agriculture and their critical role in the ongoing movement too. Convoys of women farmers from various districts are reaching the morchas for the Mahila Kisan Sansad,” the SKM said.

The umbrella body of farmer unions has been protesting against the three contentious farm laws at Jantar Mantar since July 22, during the monsoon session of Parliament.

It claimed that the last eight months witnessed several lakh farmers from almost all states of India joining the protests.

Meanwhile, the SAD on Saturday sought an apology from Union Agriculture Minister Narendra Singh Tomar for saying in Parliament that his government has no record of farmers who died at Delhi borders during the course of the agitation against the Centre’s farm laws. Tomar had made the statement on Friday.

Former Union minister and Shiromani Akali Dal (SAD) leader Harsimrat Kaur Badal expressed shock at the statement and said, “This anti-farmer attitude of the NDA government is responsible for the plight of farmers who have not only been stonewalled for eight months but even their deaths are not being recognised.”

“The SAD condemns this anti-human attitude and requests the agriculture minister to apologise to farmers for this statement and assure the country that the ‘annadaata’ will not be humiliated in this manner again in Parliament,” she said in a statement, adding that the government refused to recognise the death of over 550 farmers by “feigning ignorance”.

The SAD leader said the NDA government had also made it clear in Parliament that it was functioning in a “dictatorial manner” and had not even cared to conduct any study to ascertain the apprehensions in minds of farmers about the three farm laws.

Earlier on Thursday, the protesting farmers had reached Jantar Mantar amid the Parliament session.

“We have come this far after losing many of our own. We are ready for a long haul. We have come prepared,” Harpal Singh from Bharatiya Kisan Union (Chaduni) had said.

The 200 farmers, wearing identification badges and carrying flags of their unions, travelled to Jantar Mantar from their Singhu border protest site in four buses with a police escort.