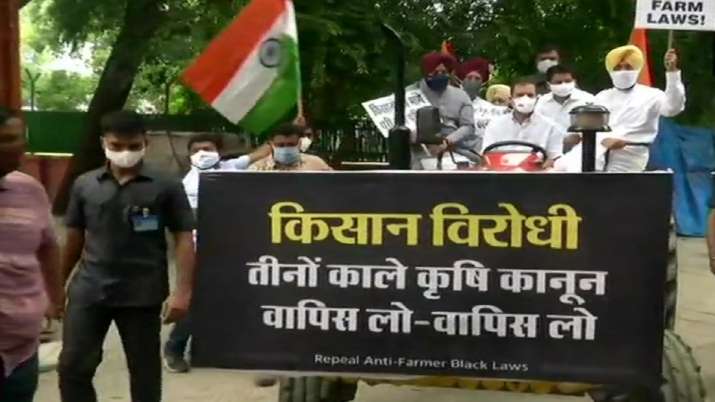 Rahul was accompanied by party colleague and Rajya Sabha MP Deepender Hooda. Speaking to reporters outside the Parliament, Rahul said that the Modi government should repeal the three “controversial” farm laws.

“The laws will only benefit a few businessmen… the whole country knows whom these laws will benefit,” he added.

Thousands of farmers from Punjab, Haryana and West UP across the country have been agitating at three Delhi border points — Singhu, Tikri and Ghazipur — against the three farm laws that they claim will do away with the minimum support price system, leaving them at the mercy of big corporations. Over 10 rounds of talks with the government, which has been projecting the laws at major agricultural reforms, have failed to break the deadlock between the two parties. A tractor parade in Delhi on January 26, that was to highlight the demands of farmer unions to repeal three agriculture laws, had dissolved into anarchy on the streets of the national capital as thousands of protesters broke through barriers, fought with the police, overturned vehicles and hoisted a religious flag from the ramparts of the iconic Red Fort.

Who Is Bhavani Devi, India’s First Fencer To Appear In The Tokyo Olympics 2020?