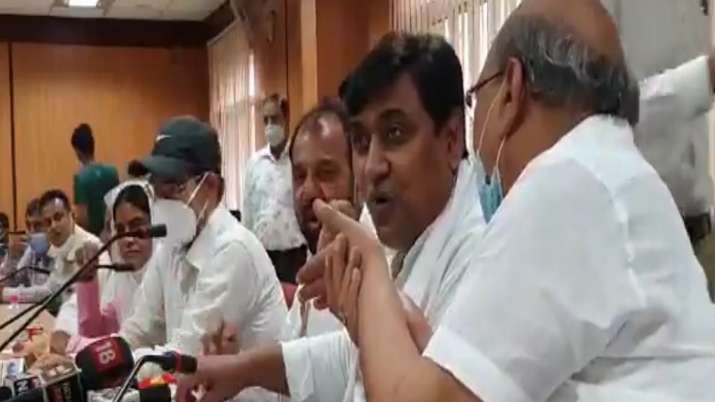 RPSC RAS Exam Results Controvery: Facing severe backlash over the issue of Rajasthan Administrative Service (RAS) exam 2018 result, state Education Minister Govind Singh Dotasra believes that his ouster is imminent. Dotasara, however, has repeatedly denied any wrongdoing in the selection of his daughter-in-law and her brother and sister in the RAS exam.

During an event in Ajmer on Monday, July 26, Dotasra was heard telling people seated close to him that he may have to step down from the minister’s post soon.

“…aap somwaar ko aa jao…main shayad 2-5 din ka mehmaan hoon (come on Monday…guess I am there for just 2-5 days more),” Dotasra was heard saying as he munched some snacks during the event.

Dotasra, who is also the Pradesh Congress Committee president, had earlier said the exams were conducted in a fair manner and stressed that only capable, deserving candidates made it to the merit list.

Dotasra’s daughter-in-law and her brother and sister secured 80 out of 100 marks in the interview round of Rajasthan Administrative Service (RAS) exams, while many toppers of the RAS written test were given marginal numbers.

ALSO READ: No contradiction among Congress leaders in Rajasthan on cabinet reshuffle: Maken

The marks in the interview round make a significant difference to the overall tally and affect a candidate’s rank, based on which positions are allotted.

“It seems that the three candidates were interviewed by the same person, or else should we call this ‘coincidence’,” asked Gulab Chand Kataria, the Leader of Opposition in Rajasthan.

Dotasra, on his part, has said that three of his relatives got 80 per cent in the interview because of their talent.

“Scoring 80 per cent in the RPSC interview is not a big deal if the candidate has talent,” he said.

Looking at the anomalies, Kataria asked Chief Minister Ashok Gehlot to order a probe into the matter.

“Even if the Chief Minister of Rajasthan has little faith in justice, he should immediately remove the PCC state president and education minister, and initiate a high-level inquiry. Also, he should immediately take steps for the proper functioning of the Rajasthan Public Service Commission, as lakhs of promising students from the state are losing an opportunity they deserve,” Kataria said.