BOLD: 1000 saplings planted under project ‘Bamboo Oasis on Lands in Drought’ in Jaisalmer 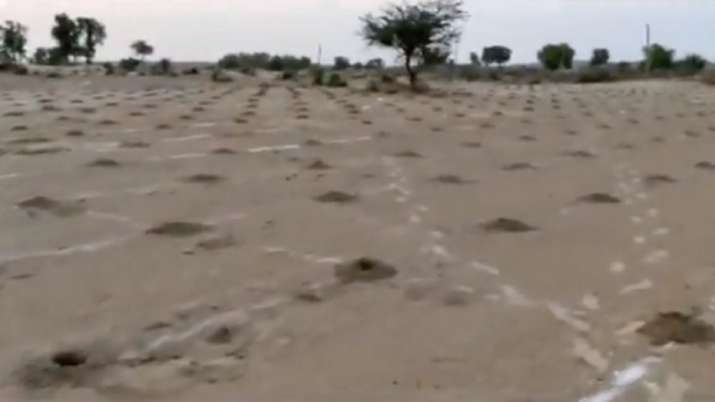 A unique scientific exercise serving the combined national objectives of reducing desertification and providing livelihood and multi-disciplinary rural industry support has been initiated by Khadi and Village Industries Commission (KVIC).

Bamboo Oasis on Lands in Drought

The project named “Bamboo Oasis on Lands in Drought” (BOLD) is the first of its kind exercise in India which was launched from the tribal village Nichla Mandwa in Udaipur, Rajasthan by KVIC Chairman Vinai Kumar Saxena in presence of MP Arjun Lal Meena and over 2000 local villagers. Strict social distancing and Covid-19 norms were followed during the event.

A whopping 5,000 saplings of special bamboo species – Bambusa Tulda and Bambusa Polymorpha specially brought from Assam – have been planted over 25 bigha (16 acres approx) of vacant arid Gram Panchayat land. KVIC has thus created a world record of planting the highest number of bamboo saplings on a single day at one location.

Project BOLD, which seeks to create bamboo-based green patches in arid and semi-arid land zones, is aligned with Prime Minister Narendra Modi’s call for reducing land degradation and preventing desertification in the country. The initiative has been launched as part of KVIC’s “Khadi Bamboo Festival” to celebrate 75 years of independence “Azadi ka Amrit Mahotsav”.

KVIC is set to replicate the Project at Village Dholera in Ahmedabad district in Gujarat and Leh-Ladakh region by August this year. Total 15,000 bamboo saplings will be planted before August 21.

India is a signatory to the UN Convention to Combat Desertification (UNCCD). In his keynote address at the UN High-Level Dialogue on Desertification, Land Degradation and Drought on June 14, Prime Minister Modi gave a clarion call of restoring 26 million hectares of degraded land by 2030. This assumes great significance as nearly 30 percent of land in India is undergoing desertification at a rapid pace.

KVIC Chairman Vinai Kumar Saxena said the green patches of bamboo on these 3 places will help in reducing the land degradation percentage of the country, while on the other hand, they will be havens of sustainable development and food security “Bamboo plantation drive on such a large scale will create additional income for the local tribal population while it will also support the local bamboo-based industries and thus boost the rural economy. In three years, these bamboo patches will be able to meet the bamboo requirement of Agarbatti manufacturers in Rajasthan, Gujarat and Madhya Pradesh. This way, the bamboo patches will fulfil the larger UN sustainable development goals (SDGs),” Saxena said.

Member of Parliament Arjun Lal Meena said the bamboo plantation program in Udaipur will boost self-employment in the region. He said such projects will benefit a large number of women and unemployed youths in the region by connecting them to skill development programs. He lauded KVIC for creating self-sustainable employment opportunities and said this will contribute towards achieving the Prime Minister’s dream of Aatmanirbhar Bharat.

KVIC has specially brought two species of bamboo – Bambusa Tulda and Bambusa Plymorpha – from Assam. While Bambusa Tulda is used for making Agarbatti sticks; Bambusa Polymorpha is used for making furniture and handicraft items. Further, to develop the plantation site into a hub of beekeeping activities, KVIC has planted 100 trees each of papaya, pomegranate and Moringa.

KVIC has judiciously chosen bamboo for developing green patches. Bamboos grow very fast and in about three years’ time, they could be harvested, and income recorded. In these three years, the 5000 bamboo plants will produce at least 20,000 bamboo logs weighing about 500 MT of bamboo. At the current market rate of Rs 5000 per ton, this bamboo produce will generate an income of nearly Rs 25 lakh after three years and later on every year, thus supporting the local economy.

Bamboo can be used for making agarbatti sticks, furniture, handicraft, musical instruments and paper pulp while the bamboo waste is widely used in making charcoal and fuel briquette.

Bamboos are also known for conserving water and reducing evaporation of water from the land surface, which is an important feature in arid and drought-prone regions.