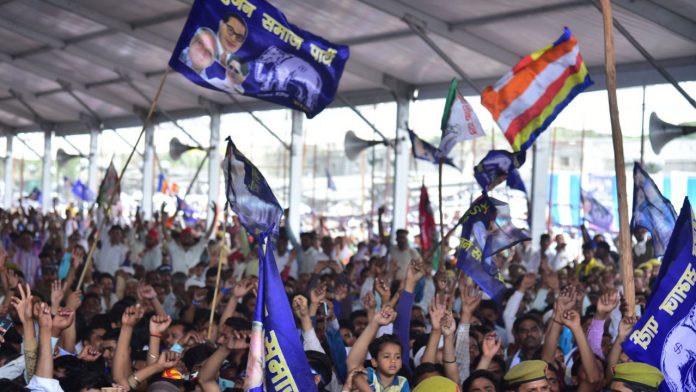 One of the last pillars of the Bahujan Samaj Party in Uttar Pradesh has also crumbled. Former Speaker and senior BSP leader, Sukhdev Rajbhar, has announced his retirement from active politics and formally handed over the baton to his son Kamlakant Rajbhar Pappu.

In an emotional letter released on Saturday night, Sukhdev Rajbhar said that he was crestfallen over the manner in which the Bahujan movement was getting weaker by the day and how the government was suppressing the cries of the deprived and the underprivileged.

He recalled his association with BSP founder Kanshi Ram and lamented that the Bahujan movement was no longer opposing it aggressively.

In an apparent reference to recent sacking of former BSP state president and MLA from Akbarpur, Ram Achal Rajbhar, Sukhdev, in his letter, expressed serious concern over the manner in which the so called ‘well-wishers’ of the Rajbhar community were now ‘removing leaders of the community from positions that matter’ owing to personal interests.

“Such self-centred leaders are leaving the Bahujan movement directionless. This state of affairs has left me very saddened,” he said in the letter which he has sent to BSP chief Mayawati.

Sukhdev Rajbhar has said that he was happy that his son has decided to further his struggle for the deprived under the leadership of Samajwadi Party president Akhilesh Yadav.

“Hence I have decided to step back and make way for my son to take over my political legacy and continue with my struggle for the uplift of the poor. I am happy that he has decided to further our resolve to become the voice of the deprived under the leadership of Samajwadi Party president Akhilesh Yadav,” Rajbhar, stated in his two-page letter.

Sukhdev Rajbhar’s the announcement of quitting BSP and handing over his political legacy to his son who is with Akhilesh Yadav is being seen as a major gain by the Samajwadi Party.

It is also a huge loss for the BSP. Sukhdev Rajbhar has been a committed BSP leader and enjoys considerable clout in the Rajbhar community.

A five-time MLA and BSP veteran from Didarganj in Azamgarh, he has been known for his non-controversial image and loyalty to the BSP.

“The BSP now faces a complete loss of second rung leadership. It is Mayawati and Satish Chandra Mishra and no one else. Almost all caste leaders – from Rajbhar to Kushwaha to Maurya – are out of the party which speaks volumes for the state of affairs here,” admitted a BSP MLA.