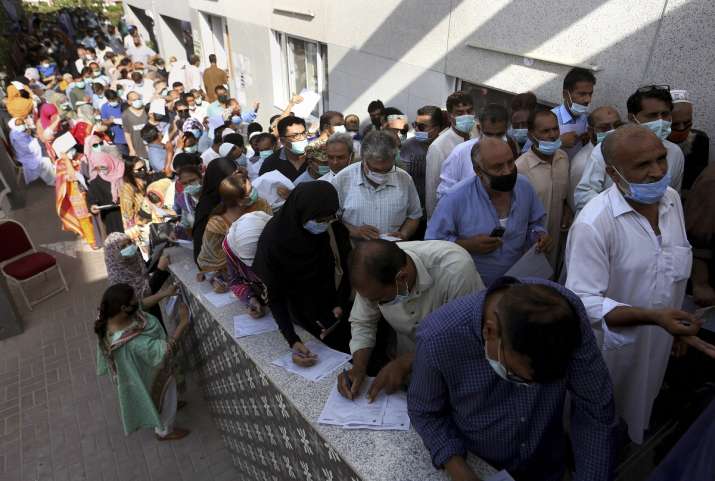 The vaccination process was reportedly stopped at Karachi Expo Centre following chaos after hundreds of people rushed to get themselves inoculated against COVID-19. According to ARY News, scores of people including students, labourers, senior citizens queued up outside the Karachi Expo Centre on Saturday, the biggest vaccination centre in the city after the provincial government announced to block SIM cards of unvaccinated citizens.

A glass door of vaccination centre hall number 4 was broken and a security guard was also injured as a result of a scuffle outside the centre, said the Pakistani news channel.

The National Command and Operation Centre chief day before yesterday announced that August 31 will be the last date for workers of the hotels and restaurants, employees of the train service, public transport, government offices and those working at shops and markets to get vaccinated. “After this deadline, the un-vaccinated people will not be allowed to work,” he announced.

It is to be noted that the Sindh government yesterday imposed a lockdown till August 8 as the province continues to battle the dangerous surge in COVID-19 infections.

Earlier in the day, the Sindh government has announced to ease lockdown restrictions notified yesterday, lifting the pillion riding ban and allowing sectors that are fully vaccinated to operate.

According to the statement issued by Sindh chief minister’s office, 30 more succumbed to the disease during this period, taking the death toll to 6,001. “30 more patients of COVID-19 died overnight lifting the death toll to 6,001 that constituted 1.6 per cent death rate and 2,772 new cases emerged when 18,267 tests were conducted that came to 15.1 per cent current detection rate,” the statement read.

According to the statement, out of 2,772 new cases, 2,200 have been detected from Karachi, reported ARY News.