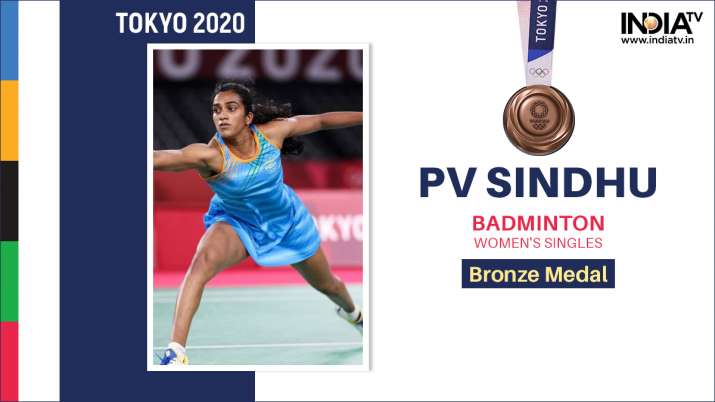 Reigning world champion PV Sindhu on Sunday brushed aside He Bing Jiao of China 21-13, 21-15 to secure the bronze medal in the women’s singles event at the Tokyo Olympics.

After missing the chance to advance into her second successive Olympics final, Sindhu outclassed the Chinese shuttler to register a straight-game win in the third-place playoff at Musashino Forest Plaza.

The 26-year-old silver-medallist from the Rio Games also became the first Indian woman to win two individual Olympic medals. Wrestler Sushil Kumar was so far the only Indian to have finished twice on the podium at the quadrennial showpiece event. Sushil had followed up his bronze at 2008 Beijing with a silver at the London edition.

He Bingjiao, who headed into the bronze medal match after losing a closely-fought battle against her compatriot Chen Yufei, had also suffered a defeat in her last outing against Sindhu. In the BWF World Tour Finals back in 2019, Bing Jiao had lost against Sindhu in straight games.

On Saturday, Sindhu had suffered a straight-game defeat against world no.1 Tai Tzu-Ying of Chinese Taipei in the semi-final clash. The Indian shuttler was unable to counter Tai Tzu’s deception and aggressive play, going down 18-21 12-21 in the all-important contest.

Sindhu kept retrieving everything thrown at her but Tai Tzu’s deft touch and cross-court smashes crashed India’s hopes of bagging another silver at the Tokyo Games. “I’m a bit sad because it’s the semifinals, but I tried my best, it’s just not my day. I fought until the end,” Sindhu had said after the defeat.

Sindhu made up for her semi-final loss and showed great determination to outplay Bing Jiao with her aggression, scooping India’s third medal in Tokyo.

Talking about India’s medal tally at the Tokyo Games, weightlifter Mirabai Chanu has already gone back after collecting a silver, while boxer Lovlina Borgohain is assured of at least bronze so far.