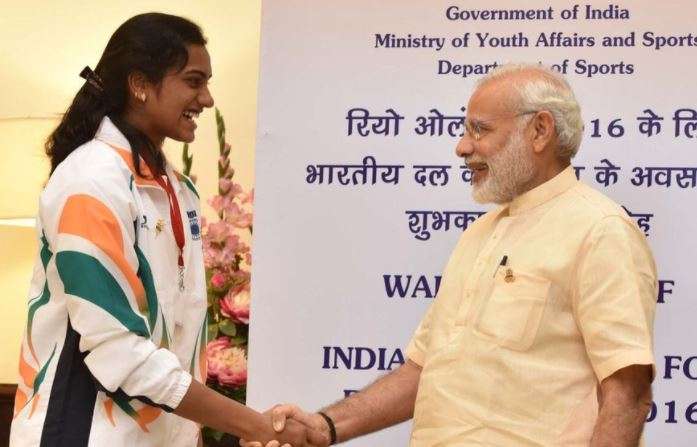 Minutes after her win, the prime minister spoke with Sindhu over phone and congratulated her personally.

With this win, reigning world champion P V Sindhu became only the second Indian and the country’s first woman to win two Olympic medals, securing a bronze after a straight-game win over world no.9 He Bing Jiao of China in the badminton women’s singles third-place play-off.

Sindhu, who has returned with medals from each of the big-ticket events such as the Commonwealth and Asian Games and the BWF World Tour Finals in the last five years, outwitted eighth seed Bing Jiao 21-13 21-15 to add a bronze to the silver that she had secured at the 2016 Rio Games.

“P V Sindhu becomes the first Indian woman to win medals in two Olympic games. She has set a new yardstick of consistency, dedication and excellence. My heartiest congratulations to her for bringing glory to India,” President Ram Nath Kovind said.

“We are all elated by the stellar performance by P V Sindhu. Congratulations to her on winning the Bronze at @Tokyo2020. She is India’s pride and one of our most outstanding Olympians,” Prime Minister Narendra Modi said in his tweet.

“Well played @Pvsindhu1. Time and again you have proved your unparalleled commitment and devotion towards the game. May you continue to bring glory to the nation. We are proud of your remarkable accomplishment,” Union Home Minister Amit Shah said in praise for Sindhu.

“Congratulations @Pvsindhu1 on winning bronze medal for India Flag of India in badminton at #TokyoOlympics2020 We are all proud of you! You are the first Indian female Olympian to have won two medals,” India TV Editor-in-chief and Chairman Rajat Sharma wrote on Twitter.