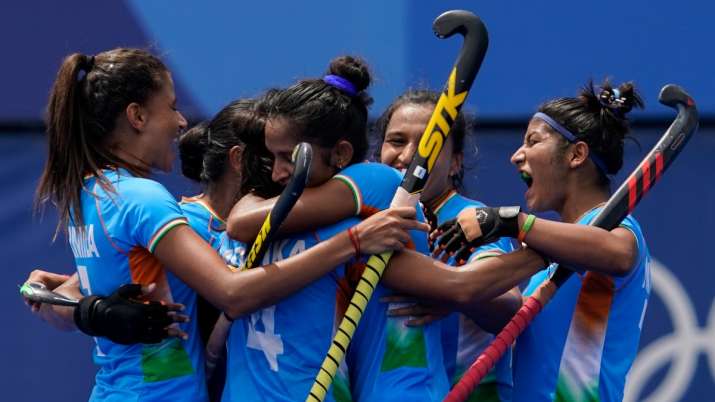 The Indian women’s hockey team created history, reaching their first-ever semifinal in Olympics after the side stunned World No.2 Australia 1-0 on Monday. Gurjit Kaur scored India’s sole goal from the penalty corner to lead India to the final four of 2020 Tokyo Olympics.

Australia entered the quarterfinals as big favorites in the game against India, having topped in their group standings. India, meanwhile, had lost their first four matches before making an impressive comeback in the final two games against Ireland (2-1) and South Africa (4-3) in the group stage.

Contrary to expectations, India made a dominant start against Australia, making multiple entries into the circle and almost taking a lead early in the game when Vandana Katariya and Rani Rampal matched up inside the D. However, the Indian captain narrowly missed the net, finding the goalpost.

India also continued to avert the Australian attacks with a disciplined defence, not allowing big channels for the Aussie forwards to operate in.

India eventually took the lead in the 22nd minute (second quarter) of the game through a penalty corner. Incidentally, India had failed to convert 17 penalty corners against Ireland in their group game but scored with their first against Australia, who hadn’t conceded with a PC until this point in the 2020 Olympics.

Following the goal, however, Australia began to dominate the proceedings with a barrage of attacks on the Indian team. India maintained a disciplined shape and continued to frustrate the Aussie forwards. By the end of 45 minutes, Australia had taken 10 shots on goal but a good defensive performance, coupled with crucial saves from goalkeeper Savita meant that the Aussies failed to break the deadlock in the game.

In the final quarter, Australia dominated most of the ball possession while India resumed on their defensive game. The women in blue saved two successive penalty corners early in the quarter as Australia’s struggles inside the circle continued. In the final three minutes, Australia won two more penalty corners and tried to be experimental with their attack, but India’s defence remained ever-disciplined to defend the Aussie attack.

Eventually, the Indian team successfully averted all the attacks from the women in yellow to make their maiden semifinal appearance in Tokyo Olympics.