UP: Three arrested for assaulting man over forced ‘conversion’ in Kanpur 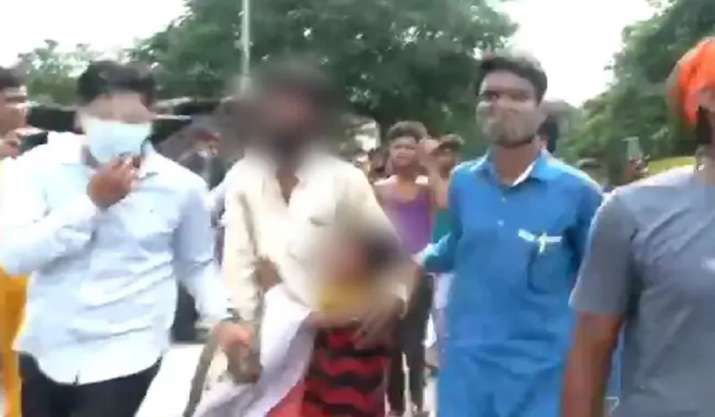 A man in Kanpur was beaten up on a road in public view by a mob reportedly belonging to Bajrang Dal over allegations of forced religious conversion. According to reports, the victim (45) was allegedly made to chant ‘Jai Shri Ram’ by the mob.

The incident took place in Varun Vihar area of Kanpur on Wednesday. It came to light when a video clip went viral showing the victim’s minor daughter crying and clinging to him and pleading with the mob to spare her father. The man was later handed over to the police.

Police swung into action after the video clip of the incident went viral. Police said that 12 persons have been booked on the basis of a complaint filed by the victim. Three people have been arrested so far.

“Rahul, Aman and Rajesh have been arrested after the incident and further investigation is underway,” said senior Kanpur police officer Dr Anil Kumar in a late-night statement on Thursday.

According to the victim’s family members, Bajrang Dal members barged into their house on Wednesday evening. They alleged that the Slot RTP man tried to forcibly convert a Hindu woman into Islam. The mob then took him out on the road, where he was paraded and beaten.

Meanwhile, a woman in the victim’s neighbourhood has alleged that he and his family had been pressurizing her to convert to Islam. The lady even claimed that she approached the police and registered a complaint but no action was taken.

“They have been forcing me to convert to Islam and even offered me Rs 20,000. I filed a police complaint against them but no one took any action. I finally approached the Bajrang Dal,” she said.

However, the victim’s family members have termed the woman’s allegations as baseless. They also said that Bajrang Dal members have threatened them to leave the locality.