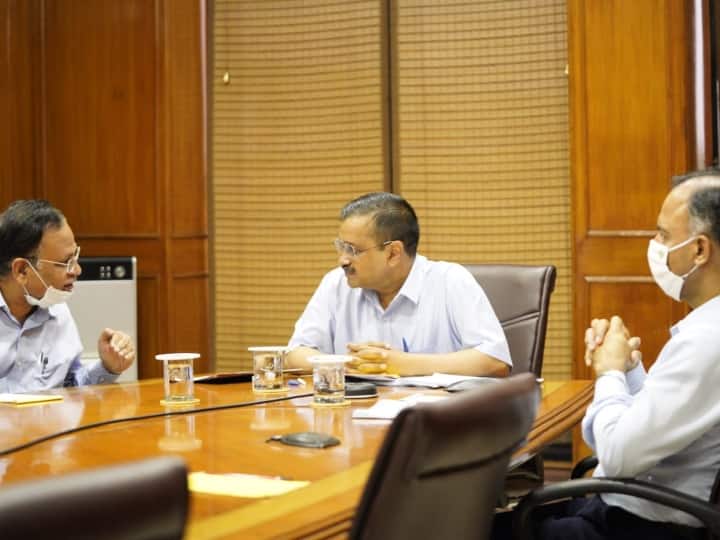 New Delhi: Heavy rains on Monday in Delhi caused waterlogging in many places, due to which the common people had to face a lot of difficulties. The Lieutenant Governor and the Chief Minister today held a review meeting of the drainage system of Delhi. Apart from the Lieutenant Governor and the Chief Minister, officers of Delhi Jal Board, Municipal Corporation of Delhi, PWD, and Flood and Irrigation Department also participated in this meeting held through video conferencing.

After the meeting, Chief Minister Arvind Kejriwal said that Delhi being the capital of the country, should have one of the best drainage systems. It has been decided in the meeting that a world-class drainage system will be constructed in Delhi.

CM Arvind Kejriwal said that all agencies performed well together. Minto Bridge is proof of their performance, and there is no waterlogging on Minto Bridge. A construction plan similar to that of Minto Bridge will be implemented on other 147 points of Delhi, to solve the problem of waterlogging. In the meeting, all the departments were instructed to start the exercise for the drainage system. PWD officials have been instructed that there is a possibility of heavy rain in Delhi for the next three days, in which case all the officers will be available 24 hours.

After the meeting, CM Arvind Kejriwal tweeted, “In view of the monsoon, a review meeting was held with PWD, MCD, DJB and I & FC under the chairmanship of Hon’ble Lieutenant Governor, regarding the drainage system of Delhi. A system like Minto Road will be built at other points of Delhi. Drains and sewers will be cleaned regularly and, a world-class drainage system will be built in Delhi.”

The officers of all the departments involved in the meeting shared information about the completed work of the drainage system in Delhi through a presentation. In the review meeting, Chief Minister Arvind Kejriwal said, “all the agencies did a great job together, and Minto Bridge is the biggest proof of their success. Delhites believe that the onset of rains is announced as soon as the Minto bridge fills up. Our officers and engineers have done a great job together. This time Minto Bridge is not waterlogged. I want to congratulate all the officers and engineers for this achievement. With successful work at Minto Bridge, you have proven that work can be done at all the points in Delhi where water accumulates due to rain every year.” There are about 147 such points in Delhi. If all the points are planned and designs implemented like Minto Bridge, we can solve the waterlogging problem of Delhi.

In the meeting, PWD Minister Satyendar Jain said, “it is likely that there will be continuous rain for three days. Everybody should be ready for this. We have to be prepared to handle mishaps during the night. We have more than 1500 pump sets, and we have to keep all of them on alert. All officers and engineers will always be available, as they may be needed any time in 24 hours for the next few days.”