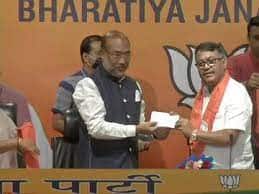 Konthoujam, who is a six-time MLA from the Bishnupur seat, after joining the BJP said that he would work dedicatedly for the saffron party in Manipur where the assembly elections will be held next year.

The Manipur Chief Minister on his part welcomed Konthoujam into the BJP and thanked Prime Minister Narendra Modi for taking care of the north-east.

Asserting Manipur has been peaceful and doing well ever since Prime Minister Modi came to power at the Centre, he said: “PM Narendra Modi has cared for the north-east and recently five ministers from the region have been inducted into the Union Cabinet.”

Konthoujam had resigned from the Manipur Assembly earlier on July 28 citing “personal reasons”. His resignation was submitted to the office of the assembly secretary on Wednesday.

He also resigned from the Congress’ primary membership.