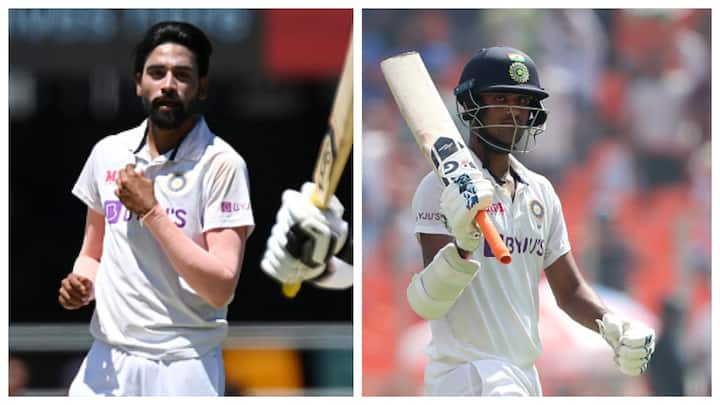 Chester-le-street: Mohammed Siraj, while bowling to Washington Sundar in a practice match against County XI side got involved in an exchange of words with him. First time in the history of Indian cricket, two different squads are playing in two different international events. As Shikhar Dhawan led ODI side is taking on the Sri Lankas in ODIs, a Rohit Sharma-led Test side has taken the field in Durham for a practice match against a County Select Side.

Surprisingly, Avesh Khan and Washington Sundar are the two Indian players who are playing in the County Select side. The move comes as team India wants all its players to get ample match time before taking the field against England in the first Test on 4 August.

Washington Sundar came to bat at no. 4 for the County Select side. The Indian batsman was being troubled by the pace of Mohammed Siraj. The incident happened when Sundar was facing his first ball. Take a look at the ‘eye-to-eye’ below:

Exchange or words between @Sundarwashi5 and @mdsirajofficial during the practice match. 😬

Mohammed Siraj eventually had the last laugh as the pacer managed to pick up the wicket of Washington Sundar. Siraj bowled a fast and gripping bouncer that caught the edge of Sundar’s bat.

Earlier in the match, India had scored 311 runs courtesy of the century by KL Rahul and a good 75 by Ravindra Jadeja. The Indian bowlers had a good start till Lunch on Day 2. County XI was 44/3 at Lunch with Siraj, Bumrah and Umesh all getting one wicket each.