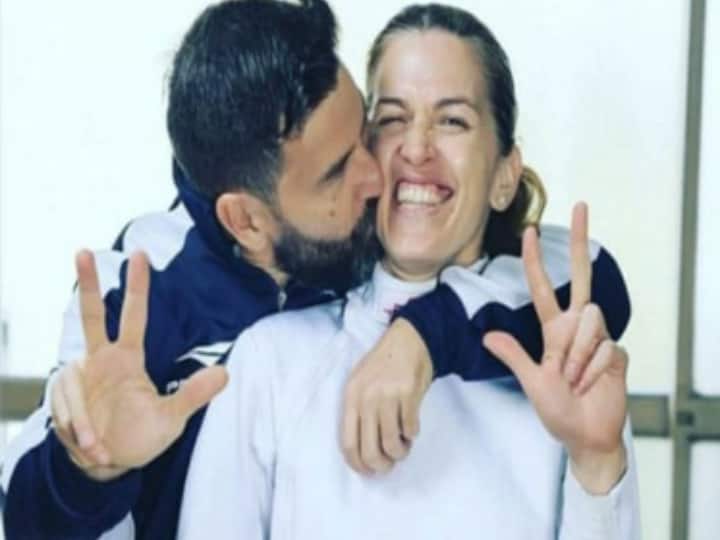 Argentinian fencer Maria Belen Perez Maurice had a reason to smile despite her heart-breaking 15-12 loss to Hungary’s Anna Martoat at the omgoing Tokyo Olympics 2020 on Monday. The 36-year-old lost the chance of a medal after she suffered a loss in the women’s sabre event, but left the Games with a ring, after accepting a surprise marriage proposal from her coach and long-time partner Lucas Guillermo Saucedo, reported the Guardian.

Saucedo came up to Maurice with a surprise marriage proposal when the Argentina fencer was analysing her loss in the post-match interview. Saucedo was holding a hand-written note in Spanish which read:”Will you marry me??? Please.” The fencer screamed in delight and accepted.

“They [the interviewer] told me to turn around, and he had the letter. I forgot everything. I was like: Oh my God. We are very happy. We are very good partners. Of course, we have fights, but we enjoy each other’s time. We love each other so much, and we want to spend our lives together. We are going to celebrate in Buenos Aires with a big barbecue,” the Guardian quoted Maurice as saying.

Talking about the proposal, Saucedo said: “I love her, and when she lost the match she got very sad, so maybe this proposal should change her mentality. I wrote on the paper at the moment. If she had won, no, I would have waited for the moment.”

Before becoming a coach, Saucedo had represented Argentina in fencing. The couple had met through fencing. He coached Maurice and they eventually started dating.