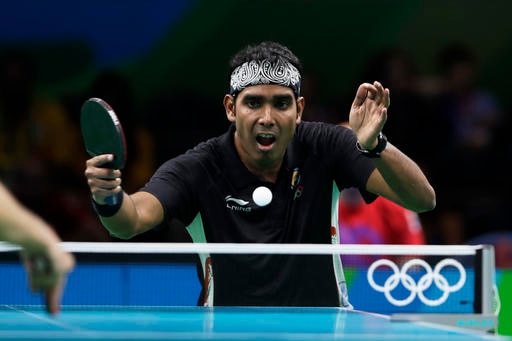 Tokyo Olympics 2020: India’s most experienced and star table tennis player Sharath Kamal Achanta lost his third round match 1-4 to reigning Olympics and world champion Ma Long of China in Tokyo today. With this, India’s position as a contender in the table tennis competition of Tokyo Olympics has also ended. 39-year-old Sharath, who was representing India for the fourth-time in Olympics, gave a tough fight to his formidable opponent in the first three games of the match but was eventually defeated 7-11, 11-8, 11-13, 4-11 and 4-11 in the last round of the 46-minute match.

Both Sharath and Manika Batra were the first Indian players to enter the third round. G Sathiyan and Sutirtha Mukherjee, however, were unable to progress beyond the second round.  In mixed doubles, Sharath and Manika were considered as strong contenders for the medal, but if the draw had been easier in mixed doubles and in men’s singles, we would have definitely seen a different outcome.

Sharath’s performance in the match of 32 rounds against the Chinese legend has convinced him that he will also be a strong competitor in the Paris Olympics, three years from now. Sharath said after the match against Long, “It was an excellent match and it was probably my best match and the best tournament of all that I have played.” The Chinese player also admitted that Sharath had made the match tough for him. Long said, “It was a tough match. Every match in the Olympics is tough. It doesn’t matter which opponent or country you’re playing against. I had prepared myself to overcome such challenges. The third game was important, especially after good performance in the first two.”

Sharath, who made a stellar comeback against Portugal’s Tiago Apollonia in the previous match, worked hard to make a comeback against Long as well. After losing the first game, he won the second game and then saved three game points in the third game but the match remained one-sided in the last two rounds of the game. In the beginning of the first game, Sharath gave Long a run for his money. Once he came back to level the score at 5-5, Long scored four points in a row and then managed to win the first game on the second game point. Sharath dominated three-time Olympics gold winner Long so far in the second game with his forehand return and controlled playing techniques. Long then scored four points in a row but Sharath bounced back and won the game with a fine forehand return.

Sharath did not go down without a fight

Long was leading 6-4 in the third game but Sharath soon took the lead. Long scored two consecutive points at 8-8, giving him two game points but Sharath kept himself focused. He saved a total of three game points. The Chinese player took a ‘time out’ and took the lead in the match at the fourth game point. Long started the fourth game with a strong 6-0 lead and despite Sharath’s efforts, managed to win the game in seven minutes. The fifth game too saw the same story. The Indian player made some mistakes under pressure as Long took a 9-3 lead. Sharath was unable to counter Long’s crisp smash.