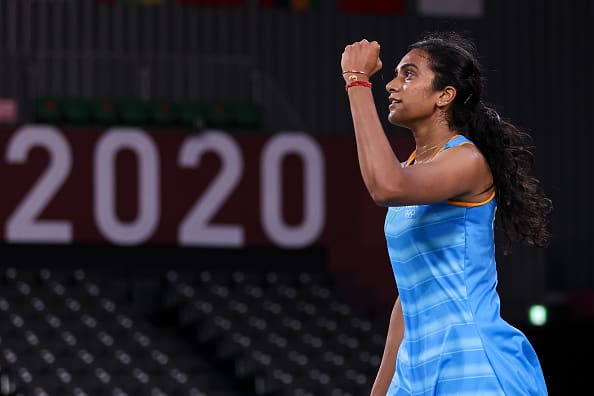 Tokyo 2020:After losing to T.Y. Tai of Chinese Taipei in the semi-final of the women’s singles badminton event, PV Sindhu has made sure that she doesn’t go back empty-handed from the Tokyo Olympics 2020. She has won the bronze medal in the women’s singles event in badminton.

India’s no. 1 player defeated He Bing Jiao of China by 21-13 and 21-15 in the bronze medal match. It was a comprehensive straight-sets victory for the Indian badminton star. This is Sindhu’s second Olympic medal. Her first came when she lost the finals of the Rio 2016 Olympics to Carolina Marin of Spain. Sindhu had won a silver medal in 2016. Thus, this bronze medal is like a downgrade of sorts for the champion player.

In Sunday’s bronze medal match, the first game began well for Sindhu as she took the lead early on over the Chinese player, but as the game went on, He Bing Jiao managed to level scores. Sindu came back strongly once she reached 14 points. She won the first game with relative ease. The second game too was a bit more challenging for the Indian. She looked in complete control.

PV Sindhu’s performance in the match was dominating. While receiving the bronze medal, Sindhu would be a tad bit disappointed that she didn’t manage to win at least the silver medal match.

With an aim to add one more Olympic medal to her name, reigning world champion @Pvsindhu1 will take on 🇨🇳’s He Bingjiao in Bronze medal match of @Tokyo2020 tomorrow 🔥#SmashfortheGlory#Badminton#Tokyo2020#Cheer4India#TeamIndia pic.twitter.com/3S5PvW0Z3z

PV Sindhu had earlier defeated a higher-ranked Akane Yamaguchi of Japan 21-13, 22-20 in the women’s singles quarter-final of badminton at the Musashino Forest Plaza Court 1 to secure a place in the semi-final in the ongoing Tokyo Olympics 2020.

Sindhu was the 2019 Badminton World Champion and was expected to wi the gold medal in the absence of Carolina Marin of pain. Nonetheless, she has won her second medal in Olympic games and also won India it’s second medal in this year’s Tokyo Olympics.