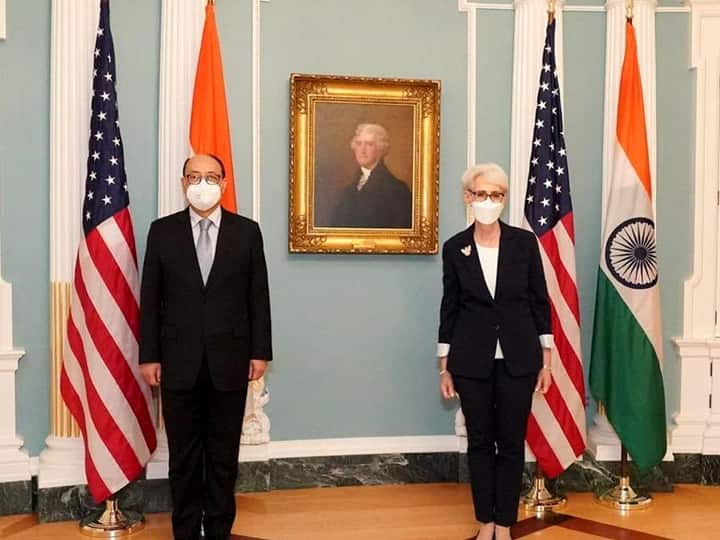 The Indian Foreign Secretary had also met US Deputy Secretary of State Wendy Sherman for substantive discussions on advancing India-US Strategic Partnership across sectors including defense, trade and investment and climate change, the Ministry of External Affairs stated.


India and the United States had also held a bilateral 2+2 Inter-sessional meeting on Wednesday in Washington DC.

“They reviewed progress made since the last 2+2 Ministerial Dialogue in October 2020 and preparations for the forthcoming dialogue later this year,” the MEA statement read.

ALSO READ | Afghanistan Soil Should Not Be Used For Terror Activities Against India: MEA On New Taliban Regime

“Both sides took stock of the progress and developments in the bilateral agenda under the India-US strategic partnership, including defence, global public health, economic and commercial cooperation, science and technology, clean energy and climate finance, and people to people ties,” the MEA stated.

“They explored opportunities for enhancing ongoing cooperation in these fields based on mutual interests. Cooperation in contemporary areas such as space, cyber security and emerging technologies was also discussed,” it added.

According to the statement, the officials also exchanged assessments about recent developments in South Asia, the Indo-Pacific region, and Western Indian Ocean, given a shared vision for peace, stability, and prosperity and for a free, open and inclusive Indo-Pacific region.

They also considered the possibility of enhancing collaboration in areas of counterterrorism, HADR and maritime security.

The two sides also agreed to continue these discussions ahead of the 2+2 Ministerial Dialogue scheduled for later this year.